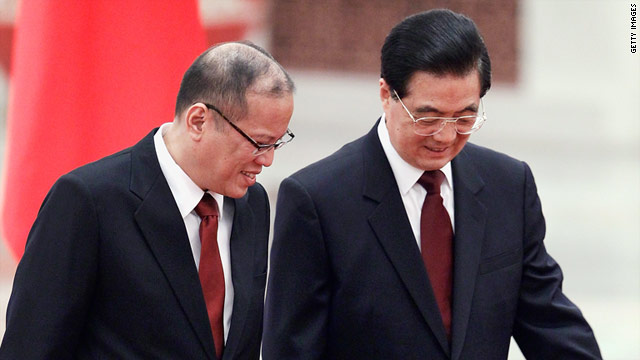 The visit includes talks with Chinese counterpart Hu Jintao, as well as meetings with businessmen in Beijing, Shanghai and Xiamen city.

During a speech in Beijing, Aquino called for an improved climate for investors from both countries.

"The most important among our efforts is instilling a culture of transparency and integrity in government, weeding out corruption and ensuring that businessmen -- whether from within our shores or from foreign enterprises -- are met with a level playing field," he said.

Last week, Philippine Foreign Affairs Assistant Secretary Cristina Ortega announced that Manila hoped to sign a five-year economic plan that would target $60 billion in two-way trade in 2016, a six-fold rise from 2010, according to Agence France-Presse.

Aquino pointed out that his country's economy had shown signs of improvement under his tenure.

"My country has received four credit ratings upgrades in a little more than a year," he said. "This compared to only one upgrade and six downgrades in the previous nine years."

The Philippine economy weathered the 2008 global downturn better than its regional neighbors due to minimal exposure to troubled international securities, lower dependence on exports, relatively resilient domestic consumption, according to the CIA World Factbook.

The Aquino administration has pledged to reduce its government deficit from 3.9% of GDP, when it took office last year, to 2% of GDP by 2013.

Aside from business agenda, Aquino is also seeking to sooth bilateral relations, which have deteriorated in recent months.

Manila has accused Beijing of intimidation in their dispute over a group of islands in the South China Sea believed to be rich in oil, gas and other minerals.

In February, the Philippines accused Chinese vessels of "bullying" its ships and firing on unarmed fishermen. In a symbolic step of defiance, the Philippines renamed the South China Sea the "West Philippine Sea." It also removed some Chinese markers in disputed waters.

In August last year, Sino-Philippine relations soured when a former Manila policeman hijacked a tourist bus with 21 Hong Kong nationals on board. The rescue mission, which was covered live by local media, went awry, resulting in the death of eight Hong Kong tourists and the hijacker.

Critics in Hong Kong and mainland China maintained the deaths could have been avoided.

After the incident, the Philippines were given a "black travel alert" by the Hong Kong government, which advised travelers to avoid the country.

In March, three Philippine nationals convicted of drug trafficking were executed by lethal injection in China. The executions went ahead despite an appeal for clemency by the Philippine government.