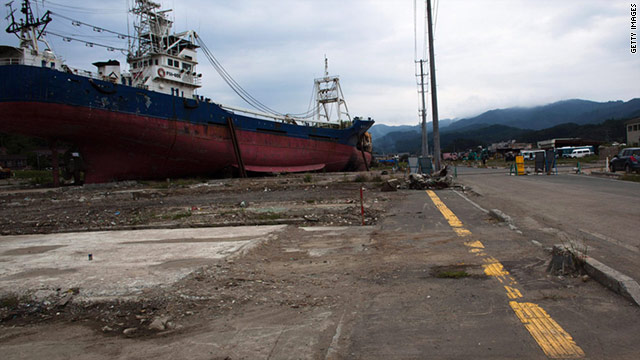 Six months after the massive earthquake and tsunami, the island of Japan still has work to do.
STORY HIGHLIGHTS

(CNN) -- The Futaba district of Japan's Fukushima prefecture was once defined largely by its farmers and its fishermen, as well as by its vast nuclear complexes that funneled power to Tokyo.

But six months after a potent 9.0-magnitude earthquake and subsequent tsunami set off a mad, weeks-long scramble to curb an outflow of radiation from the stricken Fukushima Daiichi plant, this area is very much part of the global consciousness.

See photos from then and now

"Regardless of where in the world a nuclear crisis happens, it affects everybody," said Jasmina Vujik, a professor from the University of California at Berkeley. "Fukushima definitely did affect the entire nuclear energy community."

In Beijing and Berlin and beyond, the crisis has been repeatedly invoked by experts, advocates and policy-makers debating how best to learn from, and perhaps steer away from, nuclear energy.

The answers have varied widely -- from Germany opting to abandon its program, to neighboring France, which stood by an energy source that provides its residents 80% of their power. Still, with exceptions, the debate's framework largely has been the same: Is nuclear energy worth the safety risk? Is it worth it for a country not to have nuclear power?

Besides politics of every country being different, economic situations diverge as well. Jim Walsh, an international security expert with Massachusetts Institute of Technology's Security Studies Program, said private investors -- at least in the United States -- "are not chomping at the bit" to invest in building expensive nuclear plants that may need decades to pay off.

Or as Gary Was, an engineering professor at the University of Michigan, succinctly states is the main driver -- before and after Fukushima, for private and publicly funded energy initiatives -- behind any nation's pursuit, or lack thereof, of nuclear power: "It's demand, and it's economics."

In some places, like the United States, the economic downturn has contributed to diminished demand for power and less capital to fund new projects. But it is a different story in places like India and China, which have burgeoning power needs and a desire to steer clear of options, like coal, that emit more air pollutants.

The quandary about balancing energy needs, safety and cost is felt no more than in Japan.

Before the recent disaster, about 30% of the Asian nation's energy came from nuclear plants. Now the Ministry of Economy, Trade and Industry reports 43 of Japan's 54 reactors are off-line, mostly because of safety inspections but also because of lingering effects from damaged reactors in Fukushima. Tokyo Electric Power Company President Toshio Nishizawa said last month said that these reactors should be under control by January, though they're not expected to ever function again.

That's contributed to a drastic drop over the summer in power usage -- nearly 8% across all of Japan, including more than 18% in areas controlled by TEPCO, which besides running the Fukushima plants steers energy to the capital -- according to the government ministry. But it has come at a price for the nation's already staggering economy, as well as its citizens.

"It was not easy," said Nissan Chief Operating Officer Toshiyuki Shiga, citing the car company's energy-saving measures like having workers take Thursdays and Fridays as their weekends. "I think this is not sustainable. ... We cannot continue this working situation."

Even with its energy needs, the federal government -- first under Prime Minister Naoto Kan and then his predecessor Yoshihiko Noda -- has vowed to gradually phase out nuclear power. But Masaki Ozawa, a nuclear scientist with the Tokyo Institute of Technology, thinks this is a bad idea, especially given the alternatives.

"If people want to cancel nuclear power, we have to be prepared to go back to the 19th century to burn coal," Masaki wrote by e-mail from Japan. "Japanese people should be more logical and strategic, not like Italy or Germany but like France."

Masaki was alluding to Germany's move earlier this year to shutter all its nuclear power plants by 2022. Weeks later, in mid-June, voters in Italy shot down efforts by Prime Minister Silvio Berlusconi to invigorate that nation's nuclear program.

"These events ... are significant," opined Jim Riccio, Greenpeace's nuclear policy analyst. "And in my mind, you have some motion in (the United States) and I believe you're going to see more resistance to nuclear power."

Riccio was referring to what he sees as growing popular opposition to nuclear energy, coupled with what he sees as the rising viability of wind, solar and other sources of renewable energy.

Yet Jack Grobe, a deputy director at the U.S. Nuclear Regulatory Commission (NRC) told CNN, "All of our plants are operating as they were before." He also noted four proposed new plants are in various stages of approval, and that regular inspections continue at the nation's 104 reactors.

Moreover, Grobe said there has been a "significant effort to follow up on Fukushima" -- to learn from what happened there and see if there are any lessons for U.S. plants' safety. This includes a NRC panel that has vowed, in a multi-step process, to review design and crisis response parameters as well as offer several steps that plant operators should initiate "without delay."

Grobe said the Fukushima plant's design and other issues played a major role in the disaster -- like it having a 5.7-meter seawall, which was unable to contain a significantly higher tsunami -- concluding "it is unlikely a similar sequence of events would occur in the United States."

In addition to disasters and human error, one challenge in the United States is whether its reactors will be able to stand the test of time. The newest was built in 1978, with some dating to the 1960s. The NRC has already approved several 20-year extensions for existing U.S. plants.

While some, like Walsh, fear that some of these plants' outdated designs and simple aging could prove dangerous, Grobe stresses that -- despite their official 40-year shelf-life -- "These plants are not stable or stagnant. They're continuously being upgraded."

Was notes that questions about the pressure vessel's integrity, corrosion of the nuclear core and the strength of a nuclear plant's concrete are critical to answer, in order to determine how long reactors can safely and effectively operate.

"Can we run a plant for 80 or 100 years?" asks Was. "We have replaced ... steam generators (and) nuclear vessel heads. Can we replace entire vessels?"

Meanwhile, other nations are more focused on creating new plants than making upgrades to existing ones. Talking to CNN from Belgrade, Vujik noted the Czech Republic, Slovenia, Russia and India are among those still pushing for new nuclear power plants post-Fukushima.

And Was, who recently returned from Beijing, said China is building 24 reactors in its bid to satisfy a surging power demand and realizing "they can't afford use coal" -- another viable option for mass energy use -- "because it's so dirty, and they can see that."

"These countries are absolutely committed to nuclear power," Was said of China and India, among others. "The ideal is that they (build off) the knowledge and wisdom amassed by the nuclear industry over the last 40 years."

There is a widespread belief that nuclear power plants built today are, generally, much safer than those created decades ago. But those following the industry also acknowledge that nature, human error and the innate volatility of fission means there is some inherent danger as well, whatever the improvements.

"Whatever we do in our lives, we must understand the risks associated with them," said Vujik.

CNN's Andrew Stevens and Junko Ogura contributed to this report.