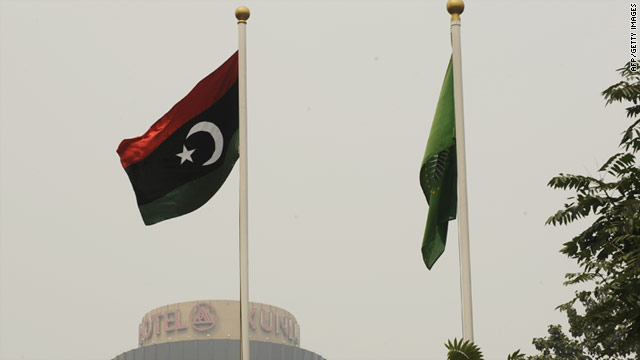 The flag of the Libyan transitional government flies at the Libyan Embassy in Beijing on August 23.
STORY HIGHLIGHTS
RELATED TOPICS

Beijing (CNN) -- China denied Tuesday it has been obstructing the release of Libya's frozen assets, one day after Beijing recognized the rebel-led National Transitional Council as Libya's legitimate governing body.

Earlier news reports had quoted the head of NTC as saying Beijing objected to the unfreezing of Libyan assets abroad -- estimated to be $170 billion -- beyond $15 billion for immediate needs.

"China has not opposed releasing the frozen funds in relevant discussions," said Jiang Yu, a foreign ministry spokeswoman, at a regular press briefing. "What we wanted was to have relevant countries provide clearer and more comprehensive information on the use of the funds and its supervision."

"We will continue to adopt a constructive and responsible attitude in dealing with this issue in the future," she added.

Despite years of close ties to Moammar Gadhafi and public criticisms of NATO's bombing campaign against regime loyalists, China Monday switched its diplomatic recognition to the NTC -- further isolating the former Libyan dictator now in hiding.

Some analysts view Beijing's abandonment of Gadhafi -- as well as its reported earlier obstruction of releasing frozen Libyan funds -- as a practical move aimed at protecting China's billions of dollars worth of investments in the North African country.

Chinese officials emphasize their decisions on Libya have been "responsible and principled" based on respect for the Libyan people, but they acknowledge Beijing's political and economic interests are also at stake.

"The NTC has stated that it would firmly adhere to the 'One China' policy and honor all previous treaties and agreements between Libya and China -- and we express our appreciation," Jiang said. "We hope to work with the NTC to promote a peaceful transition of bilateral ties and further develop them down the road."

China, which wields veto power at the U.N. Security Council, insists the United Nations spearhead the post-conflict reconstruction in Libya. Jiang said Beijing would reopen its embassy in Tripoli when security improves.

Last week China denied it had offered to sell $200 million worth of weapons to Gadhafi in the waning days of his rule.