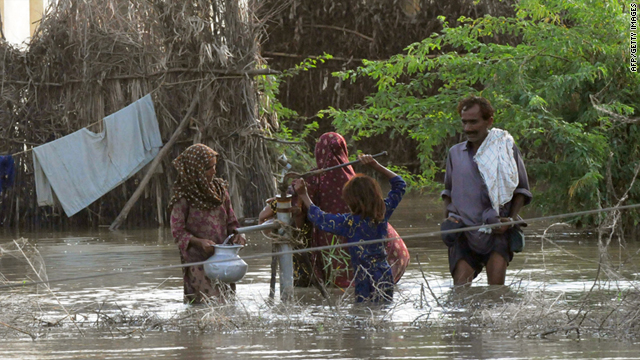 People gather around a water pump in the flooded area on the outskirts of Badin, Pakistan, on Sunday.
STORY HIGHLIGHTS

Islamabad, Pakistan (CNN) -- The number of people killed in flooding in Pakistan has risen to at least 347 in the past six weeks, the country's national disaster authority said Monday.

Half a million people are living in refugee camps, the agency said.

At least 638 people have been injured by the flooding, which has affected 7.5 million people since August 10, the disaster authority said.

Pakistan's prime minister canceled plans to address the United Nations this week so that he could "personally supervise the ongoing rescue and relief efforts for flood-affected areas," his office said Friday.

The southeastern Sindh province looked almost tranquil, with water standing anywhere from ankle-high to past the knees in otherwise empty land. But days before, the land wasn't empty.

Thousands of homes were swept away or destroyed by the flooding, which has affected an area nearly half the size of the U.S. state of Delaware.

The United Nations World Food Program has been distributing food, starting in the hard-hit city of Badin. As of Friday, more than 15,000 people have received assistance, the agency said.

The WFP estimated that 73% of food crops in the flood zone and 36% of livestock were lost or destroyed.

Last year, Pakistan was also the site of massive and deadly flooding.

In August 2010, weeks of flooding caused $9.7 billion in damages to homes, roads, farms and other parts of southwest Pakistan.