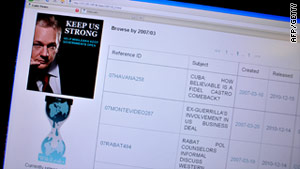 (CNN) -- Normally Germany and France are close partners at the heart of Europe -- but U.S. diplomatic cables suggest a battle royal between the two allies over satellite technology, with the German space and intelligence agencies accusing the French of bad faith and looking to the United States as a future partner to develop next-generation satellites.

At the heart of the rivalry is HiRos -- a High Resolution Optical System -- that would potentially be a leap forward in satellite surveillance. A flurry of cables obtained by WikiLeaks and published by the Norwegian newspaper Aftenposten shows German officials lobbying for a "strategic US/German partnership" in 2009 to develop the system, amid French attempts to kill it.

Some thirty pages of cables show the political maneuvering and enticing technological potential of HiRos, as well as the determination of the German space agency (DLR) to get it deployed by 2013. The cables also shows the DLR's desperation to end Germany's dependence on "foreign sources of imagery."

German officials were clearly sensitive about the dual intelligence and commercial use of the program. In February 2009, U.S. diplomats were told that "to minimize possible political backlash from developing HiRos as an intelligence satellite, the program will be managed by a civil agency." But a later cable -- from September 2009 -- talks about HiRos' "primary customer" as the German intelligence service.

One cable from February 2009 reveals efforts by German officials to steer development work on HiRos away from a Franco-German consortium toward a German company "in an effort to minimize French mischief." Subsequently, a senior official at the German space agency said Germany "had been pushed into a corner by the French and left little choice but to go it alone within the EU." The alliance with the United States, explained another official, would help prevent a French monopoly of the lucrative market for electro-optical imagery. But he was concerned by the "fierce and persistent" French lobbying to halt HiRos.

In lobbying the U.S. embassy in Berlin, German officials said HiRos would enable Germany to be "a better partner... by bringing more unique value to the table."

A senior German official suggested that three German and three U.S. satellites could be deployed, with the imagery being shared. At the same time, access to U.S. imagery of China, North Korea, Iran and the Haqqani Network (a terrorist group based on the Afghan/Pakistan border) would help fill German collection gaps.

U.S. diplomats were enthusiastic about HiRos -- saying the German satellite program "has yielded sophisticated and reliable satellite systems that provide an extraordinary amount of product for their investment." They waxed lyrical about HiRos' "daily revisit capability for any spot on the Earth's surface," and its projected ability to provide detailed 3D images. German officials also promised that HiRos would be able to process "near real-time" or in "milliseconds" data that currently takes several hours to process.

HiRos remains in the project phase, despite the intense lobbying by German space agency and intelligence officials -- and optimistic noises in 2009 that they were ready to move beyond the design phase and start "bending metal." CNN has reached out to the German space agency for further comment on the status and funding of HiRos.

Neither the U.S. State Department nor the French Foreign Ministry would comment on the leaked cables, citing policy not to discuss classified information.