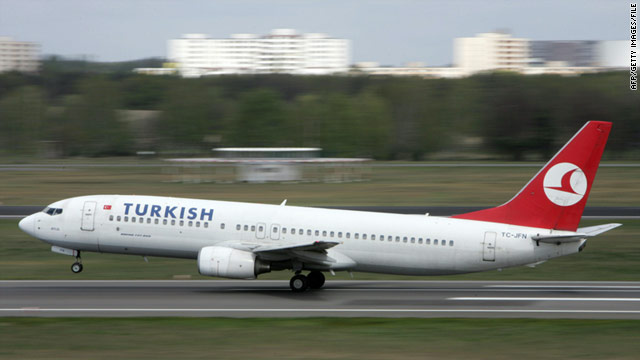 A passenger on a Turkish Airlines flight from Oslo to Istanbul tried to hijack a plane similar to the one pictured.
STORY HIGHLIGHTS

Istanbul, Turkey (CNN) -- A man claiming to have a bomb tried to enter the cockpit of a Turkish Airlines plane about to land in Istanbul, Turkey, but was tackled by passengers and taken into custody, Turkish media reported Wednesday.

The man, identified as 40-year-old Cuma Yasar, was wearing a snowmask as he approached the cockpit during the descent of the Boeing 737-800 from Oslo, Norway, into Ataturk International Airport, the state news agency Anadolu said.

He threatened to blow up a bomb he said he was holding, and urged the captain to fly back to Oslo, the news agency reported.

But passengers Firat Faysal Ali and Dag Gjerstad tackled the man, the agency reported. Airport police took him into custody after the plane landed but found no explosives on him, it said.

But they did find an identification card for the handicapped on Yasar, who suffers a mental illness, it added.

Airport operations were not disrupted, an operations supervisor at the airport told CNN.