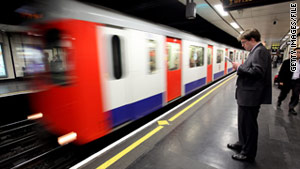 London (CNN) -- New information has emerged from an intelligence operation about the possibility of an attack being planned in or near London, with subway stations and airports of particular concern to officials, a British security source told CNN Thursday.

The action is not connected to terrorism arrests last month in Stoke, Cardiff and London, the source said.

A second British security source said a decision was made Wednesday night to raise the terrorism threat level from "substantial" to "severe" for the civil aviation industry and London transport.

Increased security precautions have gone into effect at train and subway stations and Heathrow Airport, though an attack is not considered imminent, a second British security source said.

Britain's emergencies team, which is composed of senior politicians and police officials, met Thursday morning to discuss the situation, the second source added.

"The threat level to the UK is at severe, which means that an attack is highly likely, and has been since January 2010," said the Metropolitan Police in a statement.

"We will police accordingly and use a range of covert and overt tactics which remain under constant review. As Assistant Commissioner of Special Operations John Yates said recently, recent events at East Midlands Airport and continued speculation about 'Mumbai-style' attacks serve as a stark reminder of the real and enduring threat we continue to face from terrorist groups."

"Security at our airports remains at a high level, and we remain vigilant at all times," said a spokesman for the British Aviation Authority, which is responsible for Heathrow.

That discovery led the United States to issue an unprecedented travel advisory in October for citizens traveling in Europe.

It was not clear whether Thursday's information was related to last fall's al Qaeda threat. At the time CNN reported the story in November, European counterterrorism officials were saying they believed the aim was to carry out the attacks before the end of the year.

In November 2008, gunmen belonging to Lashkar-e-Tayyiba, a Pakistani jihadist group affiliated with al Qaeda, went on a shooting rampage against several targets in Mumbai, India, including the city's most prestigious hotel, the main railway station and a Jewish center. More than 160 people were killed.

CNN's Andy Carey and Jonathan Wald contributed to this story