From Cosmin Stan, For CNN 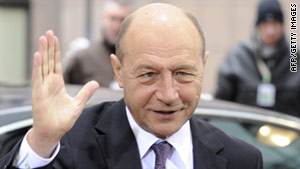 Bucharest, Romania (CNN) -- Some witches in Romania are warning they'll cast a bad spell on government officials over new labor laws that could require them to pay taxes on their income.

As of January 1, witches -- along with astrologers, fortune tellers, valets and models -- are officially named in the classification of professional trades, which means they may eventually have to declare their income and pay taxes on it.

"Astrologers are seen as riddles, like wizards and so on. Most astrologers do things with passion. So, perhaps the government will get more passion than money, because not so many people come to the astrologer," said astrologer Maria Sarbu, in an interview on Romania's Realitatea TV. Many witches are also angry about the new rules.

"The people who run this country lead it with their head upside down," witch Bratara Buzea told the network. "Yes, I agree, let them open witches practices for us, to test everyone of us, see what one can do. We do need a pension too, after all."

However, she said, "If you give something, you got to get back something. It's not the state who taught us witchcraft. There's no school where you can learn witchcraft."

If witches are forced to pay income taxes, Buzea said, they will cast a curse on lawmakers.

"It's a little spell made of some dog feces together with a little pinch of soil and black pepper," she said.