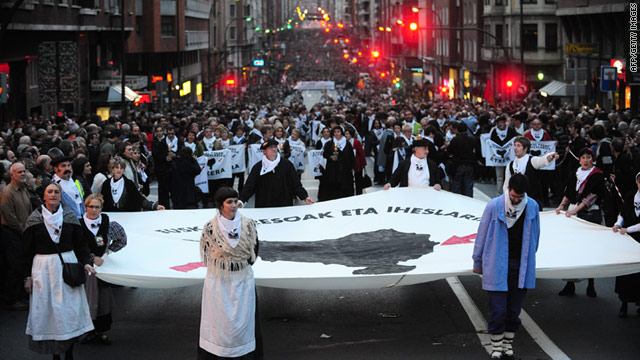 In a statement released to the Basque newspaper Gara -- where it typically releases information -- ETA said it declares a permanent general and verifiable cease-fire as a "firm commitment towards a process to achieve a lasting resolution and toward an end to the armed confrontation."

Spanish Interior Minister Alfredo Perez Rubalcaba said that the statement that the government wants to see is one where ETA calls for a definitive end, which he said the statement does not do

"Am I more tranquil today than before? Yes," Perez said. "Is this the end? I would say no."

Spain's Socialist government has repeatedly called for ETA to announce unilaterally a definitive end to its decades of separatist violence, blamed for more than 800 deaths, and a pledge to lay down its weapons.

ETA wants Basque independence in northern Spain and southwest France. Various Basque leftist parties -- including the Batasuna party, outlawed for its links to ETA -- as well as four Nobel peace laureates and the Nelson Mandela Foundation also have called in recent months for the organization to establish a permanent and verifiable cease-fire. The Batasuna party's ban from running candidates in municipal elections will not be lifted because of ETA's statement, the interior minister said.

The latest statement comes after weeks of speculation in Spain that ETA would issue a statement during the holiday season.

"It is time to act with historical responsibility. ETA calls upon those governing Spain and France to end all repressive measures and to leave aside for once and for all their position of denial towards the Basque Country," the statement said.

Another part of the message said, "The solution will come through the democratic process with dialogue and negotiation as its tools and with its compass pointed towards the will of the Basque people."

"ETA will continue its indefatigable struggle and efforts to promote and to bring to a conclusion the democratic process until there is a truly democratic situation in the Basque Country," it added.

The organization has announced cease-fires before and broken them, notably its unilateral 2006 cease-fire that was announced as "permanent," only to be broken months later with a car bomb at Madrid's airport that killed two people.

Despite ETA's current cease-fire, in effect since September, the government has not eased up on the police pressure against ETA operatives in Spain and the organization's hideouts in neighboring France and Portugal.

In the past few years, police have arrested many of ETA's suspected top operatives, as well as many of its foot soldiers, and seized bomb-making materials and weapons from hidden arms caches, virtually shutting off ETA attacks.

There are about 800 ETA convicts or suspects in prison, mainly in Spain but also in France, the Interior Ministry said recently.

ETA's statement comes two days after a march Saturday in the largest Basque city, Bilbao, by relatives and friends of the prisoners. They want the prisoners transferred to jails in the Basque region instead of being dispersed across Spain, which authorities have said is done for security purposes.

The Spanish government of Prime Minister Jose Luis Rodriguez Zapatero began a peace process in 2006 during ETA's earlier unilateral cease-fire, but after the organization detonated an airport bomb, the government called off negotiations.

Since then, officials of Zapatero's government have said they would not accept another cease-fire, only a definitive statement from ETA that it would end its armed fight, and specifying when and where it would lay down its arms forever.

ETA's goal is an independent Basque nation comprising the three-province Basque region and the neighboring Navarra region in Spain, along with three departments in southwest France that also have Basque roots. About 3 million people live in those areas now.

Officials have said that in recent years, ETA has become weaker and more isolated from its traditional base of popular support.