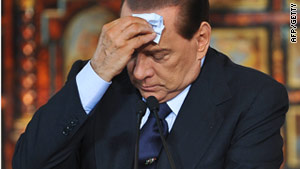 Two separate trials against Italian Prime Minister Silvio Berlusconi are pending, and a third is in the works.
STORY HIGHLIGHTS
RELATED TOPICS

Rome (CNN) -- Italy's Prime Minister Silvio Berlusconi will learn the fate of a controversial law that would shield him from prosecution on Thursday, the country's Constitutional Court said Tuesday.

The court heard arguments Tuesday about the legality of the "legitimate impediment" law, which would effectively grant top Italian government officials immunity while they are in office.

The Berlusconi-backed law says top government officials cannot be prosecuted because their officials duties make it impossible for them to attend court hearings. The law would suspend criminal trials until the official leaves office.

The law was approved in March 2010, but prosecutors in Milan challenged the constitutionality of the measure, saying it should be judges, not politicians, who determined whether someone had time to attend court.

Two separate trials against Berlusconi are pending, and a third one is in the works.

He's accused of bribing a witness to commit perjury in one case, and of tax fraud and other financial irregularities in another. Both trials began but were suspended when the immunity law was passed.

Berlusconi has been tried on at least 17 separate charges since first taking office as prime minister in 1994, but remains very popular with the Italian public.

The immunity law was due to expire 18 months after it was passed, which would make it expire in October.