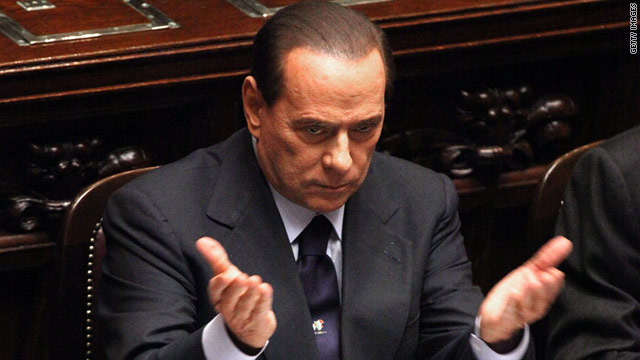 Silvio Berlusconi has been tried on at least 17 charges since first taking office as prime minister in 1994.
STORY HIGHLIGHTS

Rome (CNN) -- Italian Prime Minister Silvio Berlusconi is under investigation for allegedly having sex with a teen-ager, say prosecutors in Milan, who are linking the case to prostitution activity.

The teen, identified as night-club dancer Karima El Mahrough and nicknamed Ruby, was 17 at the time of the alleged activity, from February till May.

The Milan prosecutor said Berlusconi is being probed for complicity in prostitution with a minor and abuse of power.

But the premier's attorneys called the investigation "absurd and groundless" and a "grave interference" in Berlusconi's private life.

Milan prosecutors started the investigation of this case in December after the premier called police and urged the teen's release from prison. She had been arrested in May on charges of theft.

Prosecutors have summoned Berlusconi to answer questions in the probe.

They also sent police to search the home of Nicole Minetti, a member of his party and a Lombardy regional council member.

Berlusconi allegedly asked Minetti to serve as Ruby's tutor so the girl would be able to leave prison.

Minetti is under investigation for allegedly favoring and aiding juvenile prostitution, prosecutors said. The teen is now 18 and is considered an adult.

The premier has always denied having any involvement with any prostitutes or helping prostitution or having wild parties at this house.

Niccolo Ghedini and Pietro Longo, the premier's lawyers, said the "hypothesis put forth" has been refuted by witnesses and "direct protagonists."

This development emerges a day after Italy's Constitutional Court struck down key parts of a law that would protect Berlusconi from prosecution.

The law was designed to halt criminal proceedings against top government officials for 18 months on the grounds that they are too busy to appear in court.

But Italy's top court ruled that judges, not politicians, should be the ones to determine if a defendant is free to appear in court.

The law will automatically be modified to conform with the ruling when the Constitutional Court publishes its verdict.

The court heard arguments Tuesday about the legality of the "legitimate impediment" law, which would have granted top Italian government officials what amounted to immunity while they were in office.

The Berlusconi-backed law said top government officials could not be prosecuted because their official duties made it impossible for them to attend court hearings.

The law was approved in March 2010, but prosecutors in Milan challenged the constitutionality of the measure.

In his reaction to the ruling on Friday in an interview with Canale 5, Berlusconi said he "wasn't expecting anything different."

"The sentence has not demolished the structure of the law. It recognizes that the legitimate impediment is fair, it exists and it is necessary in order to carry out the activities of governance.

"But, it will have to be the judges that determine from time to time the judgement if the impediment is valid or not. I would like to remind everyone that this legitimate impediment adjourns the discussions, one or two hearings, but it does not alter the statue of limitations. It is nothing dramatic."

Separate trials against Berlusconi are pending. He's accused of bribing a witness to commit perjury in one case and of tax fraud and other financial irregularities in another. Both trials began but were suspended when the immunity law was passed.

Berlusconi has been tried on at least 17 charges since first taking office as prime minister in 1994, but he remains very popular with the Italian public.

The immunity law was due to expire 18 months after it was passed, which would have been in October.