Berlusconi denies ever paying for sex 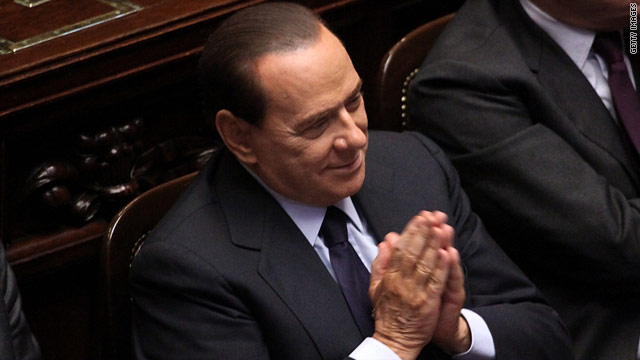 Silvio Berlusconi has been tried on at least 17 charges since first taking office as prime minister in 1994.
STORY HIGHLIGHTS

Rome (CNN) -- Italian Prime Minister Silvio Berlusconi said Monday he has never paid for sex, "not even once in my life," as Italian prosecutors investigate allegations that he had sex with prostitutes.

Berlusconi also is under investigation for alleged abuse of power for getting a teenager released from prison. The prosecutors in Milan say that the teen is one of the women involved in prostitution with the prime minister.

The teenage has denied having sex with him.

Prosecutors want to search the offices of a Berlusconi employee, suspecting that the employee paid women to have sex with the politician, they said Monday.

They filed a request with the Italian Chamber of Deputies, since Berlusconi's properties are automatically protected from search by the authorities because he is a lawmaker.

A parliamentary committee would have to approve the prosecution request before any search could go ahead. Most of the 21 members of the committee are members of Berlusconi's party. The head of the committee, Pierluigi Castagnetti, said the panel will begin consideration on Wednesday and take several sessions before reaching a conclusion.

They accuse three other Berlusconi associates of procuring prostitutes for him.

Nicole Minetti, Emilio Fede and Lele Mora "continuously carried out an activity of inducing and aiding prostitution of adults and of the minor Karima El Mahrough (Ruby), by picking, selecting, and accompanying a relevant number of young women who prostitute themselves with Berlusconi," prosecutors said in the request to the Chamber of Deputies, which lawmakers released.

In their documents, prosecutors also accuse Berlusconi of providing some young women with apartments in Milan.

El Mahrough, nicknamed Ruby, was a 17-year-old nightclub dancer at the time of the alleged activity, from February until May.

In an interview recorded Saturday and broadcast Sunday, she denied ever having sex with Berlusconi. She also said she told everyone she was 24.

Berlusconi cited her denials in his own statement the next day.

"The underage person denies ever receiving advances from me and even less a sexual rapport with me, and she affirms that she introduced herself to everybody as a 24-year-old as so many witnesses say," Berlusconi said.

He also said he is now in a "stable affectionate relationship" since separating from his second wife, Veronica Lario, in 2009. Italian media reported then that she decided to leave him after press reports that he went to the birthday party of an 18-year-old girl.

Berlusconi on Saturday called the allegation that he paid a teenager for sex "mud" thrown on him by political opponents who want to get rid of him.

"But this time they've surpassed any limit," Berlusconi said in a statement. "The mud will fall on those who use justice as a political weapon."

The nightclub dancer said over the weekend that she had received 7,000 euros (about $9,300) from him the first time they met, on Valentine's Day 2010, because a friend told Berlusconi she needed help.

She said she was a guest at several dinners he gave, but that she did not know him well.

She told the prime minister, among others, that she was 24 "because I didn't want people to know that I was a minor," she said in the interview broadcast, on Italy's Sky TG24 television channel.

The Milan prosecutor said Berlusconi is being probed for complicity in prostitution with a minor and abuse of power.

The premier's attorneys called the investigation "absurd and groundless" and a "grave interference" in Berlusconi's private life.

Milan prosecutors started the investigation of this case in December after the premier called police and urged the teen's release from prison. She had been arrested in May on charges of theft.

Prosecutors also sent police to search the home of Minetti, a member of Berlusconi's party and a Lombardy regional council member.

Berlusconi allegedly asked Minetti to serve as Ruby's tutor so the girl would be able to leave prison.

Minetti is under investigation for allegedly favoring and aiding juvenile prostitution, prosecutors said. The teen is now 18 and is considered an adult.

The prime minister has always denied having any involvement with any prostitutes or helping prostitution or having wild parties at his house.

The latest investigation emerges after Italy's Constitutional Court struck down last week key parts of a law that would protect Berlusconi from prosecution.

The law was designed to halt criminal proceedings against top government officials for 18 months on the grounds that they are too busy to appear in court.

But Italy's top court ruled that judges, not politicians, should be the ones to determine if a defendant is free to appear in court.

Separate trials against Berlusconi are pending. He's accused of bribing a witness to commit perjury in one case and of tax fraud and other financial irregularities in another. Both trials began but were suspended when the immunity law was passed.

Berlusconi has been tried on at least 17 charges since first taking office as prime minister in 1994, but he remains very popular with the Italian public.