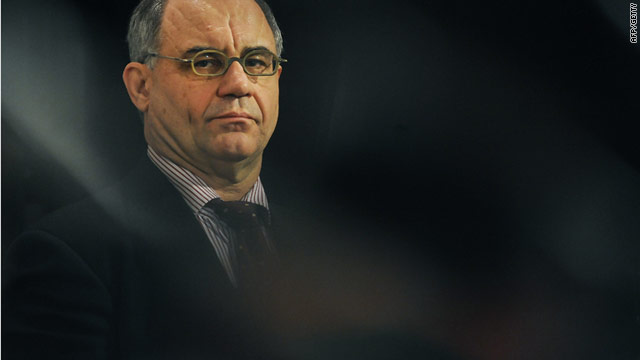 Rudolf Elmer is due to face trial in Switzerland this week on charges of breaking Swiss bank secrecy laws.
STORY HIGHLIGHTS

Rudolf Elmer describes himself as "a culprit, a witness, a whistleblower, an activist and a reformer."

He has been hailed by Britain's Observer newspaper as "the most important and boldest whistleblower in Swiss banking history."

Elmer, 54, worked for Swiss investment banking giant Julius Baer from 1987 until 2002, eventually serving as the chief operating officer of the company's subsidiary in the Cayman Islands.

While there, he claims to have uncovered evidence that the company was helping its clients evade tax.

"I believe the bank was well aware of what was going on," he told CNN.

He says that when he brought this to the attention of his bosses, he was sacked and targeted by the Swiss authorities: In 2005, he was jailed for 30 days on suspicion of violating Swiss banking secrecy.

Elmer passed the client records of some 2,000 individuals -- including politicians and high profile figures -- and companies who he believes may be involved in tax evasion on to the Wikileaks website.

CNN's Atika Shubert said the documents, on two CDs handed to Wikileaks founder Julien Assange in London on Monday "could turn the financial lives of the rich and famous inside out and open to public scrutiny."

Julius Baer denies all of Elmer's allegations, which it says are "baseless."

A spokesman for the company told CNN Elmer was a "disgruntled and frustrated" former employee who had "embarked on a personal intimidation campaign and vendetta against Julius Baer" after he was denied a promotion.

The firm claims he stole documents and made death threats against two members of the bank's staff.

Elmer, who has been living in self-imposed exile in Mauritius, is due to return home to Switzerland this week to face trial on charges of breaking Swiss bank secrecy laws.

If convicted, the former banker faces up to eight months in prison, but he remains unrepentant, telling CNN: "I'm on the right side."

Elmer says his aim in going public is "to educate society, because the man in the street doesn't really know what is going on."