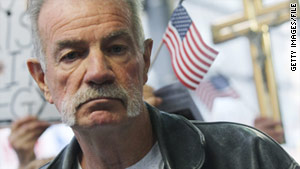 London (CNN) -- Britain has denied entry to the Florida pastor who said last year that he was "praying about" whether to burn Qurans to protest the September 11, 2001, terrorist attacks.

"The government opposes extremism in all its forms which is why we have excluded Pastor Terry Jones from the UK," a Home Office spokesperson said in a statement. "Numerous comments made by Pastor Jones are evidence of his unacceptable behaviour."

He said he had planned to go to Britain February 9 and to spend a week to 10 days there with his church group. He has been invited to speak at several rallies in England and do book signings, he said.

2010: A look at Pastor Terry Jones' past
RELATED TOPICS

Jones, the pastor of Dove World Outreach Center in Gainesville, Florida, threatened last September to burn the Quran. "We have firmly made up our mind, but at the same time, we are definitely praying about it," Jones had told CNN.

But he changed his mind after his proposal drew sharp criticism from Muslims around the world and from U.S. officials. Gen. David Petraeus, the U.S. commander in Afghanistan, said the burning of Islam's holy books "could cause significant problems" for American troops overseas.