Belarus president to be sworn in 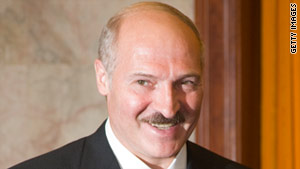 President Alexander Lukashenko, once called "the last dictator in Europe," will be sworn in Friday.
STORY HIGHLIGHTS
RELATED TOPICS

(CNN) -- The president of Belarus will be sworn in Friday after an election that triggered massive protests and led to hundreds of arrests.

The results sparked opposition candidates' protests in the capital, Minsk. Police arrested hundreds of protesters, herded them into trucks and drove off.

The sanctions would be enforced until "political prisoners and detainees" are freed, according to a statement on the European parliament website.

World bodies, including the United Nations, have demanded Lukashenko free opposition activists rounded up during the protests.

Earlier this month, the U.S. State Department said it may extend its sanctions amid the arrests.

"The United States already has some significant sanctions and visa bans and asset freezes on certain individuals in Belarus and we're looking at strengthening or widening those," said Philip H. Gordon, assistant secretary of the Bureau of European and Eurasian Affairs.

"Much will depend on what Belarus does in the coming days, particularly with regard to the detainees."

Lukashenko, who has been in office since 1994, was running against nine other candidates, according to the Central Election Commission.