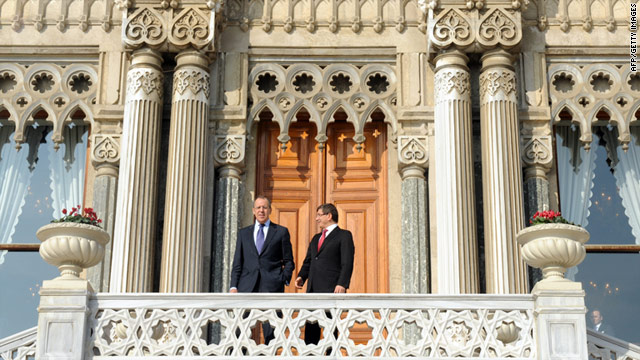 Istanbul (CNN) -- Diplomats have gathered in a 19th century Ottoman palace on the banks of the Bosphorus to discuss one of the thorniest issues of the 21st century: Iran's nuclear program.

Iran's top nuclear negotiator, Saeed Jalili, was meeting Friday for the second time in two months with representatives of what's known as the "P5 plus 1," the five permanent members of the United Nations Security Council -- the United States, France, Russia, China, and Britain -- plus Germany.

At issue are Western fears that Iran may be covertly trying to develop a nuclear weapon, charges Tehran vehemently denies.

The Iranian government insists it is being bullied by Western nations, and prevented from being able to develop nuclear technology for civilian energy needs.

Before meeting began, Iranian officials repeatedly said they would not allow discussion of suspending Iran's uranium enrichment program. During a break in the negotiations, an Iranian government spokesman repeated this defiant position.

"We will not allow any talks on the halt or suspension of uranium enrichment activities in Iran to be raised in the Istanbul talks," said Abolfazl Zohrehvand, the Supreme National Security Council undersecretary for media affairs, according to a report by Iran's Fars News Agency.

"There has been no word on enrichment at the talks at all and our country's nuclear rights have not been an issue on debate either," he added.

When this group of diplomats last met for negotiation in Geneva, Switzerland, in December, they succeeded in agreeing on little more than holding a second meeting in Istanbul.

That meeting took place amid simmering tensions between the United States and Iran.

At the conclusion of the Geneva talks, Jalili, the head of the Iranian delegation, gave a press conference next to a photo of an Iranian nuclear scientist who was killed by a car bomb in Tehran in November 2009. Iranian officials have accused their American and Israeli arch-rivals of assassinating two Iranian nuclear experts.

Washington formally denies such accusations. The U.S. government has led international efforts to isolate and punish Iran with economic sanctions.

"From the outset, we have had a dual track approach, diplomacy and pressure in order to have Iran comply with its international obligations," wrote Michael Hammer, spokesman for the National Security Council, in an e-mail to journalists this week.

Iranian officials bristle at the sanctions.

"The rhetoric we've seen from both Iran and the United States in the last 32 years has been extraordinary," says Iran expert Scott Peterson, author of "Let the Swords Encircle Me." "It is constant, it is always undermining and it's complete poison."

Despite this poisonous atmosphere, diplomats gathered for what sounded like a cordial dinner on the eve of the Istanbul talks.

"There was one table only that everybody sat together at," Turkish foreign ministry spokesman Selcuk Unal said.

Among those at the table were Iran's Jalili, U.S. Under Secretary for Political Affairs William Burns, and the European Union's foreign policy chief Catherine Ashton, who is overseeing the negotiations.

American diplomats have been working hard to build an international coalition to confront Iran's nuclear program.

"The P5+1 is united and committed to credible engagement. The onus is on Iran to take concrete and convincing steps," Hammer said Thursday.

But Russia's top diplomat struck a softer tone during a visit to Istanbul on Thursday, when he announced one of the goals of the talks should be to lift sanctions against Iran.

"Iran has tried very hard to divide the members of the international community over its nuclear program," Peterson said.

He pointed to Tehran's recent offer to provide some diplomats a tour of its nuclear facilities.

But, in a possible sign of growing frustration with Iranian tactics, none of the members of the P5+1 accepted the invitation.

"It ultimately floundered," Peterson said. "Even countries that have been strongly defending Iran's nuclear program, such as Russia and even China, eventually actually refused to send people to take part in this."

Media reports have suggested an effort may be made to resuscitate an international deal to swap nuclear fuel with Iran. Two previous nuclear swap deals collapsed, including an agreement that Turkey and Brazil brokered with Iran last May.

On Thursday, Davutoglu, the Turkish foreign minister, said he would be willing to revive that previous trilateral agreement as a confidence-building measure in the current talks. Turkey insists it is only acting as a facilitator, not a participant, in the Istanbul meeting.

This week's closed door meeting is expected to conclude on Saturday.