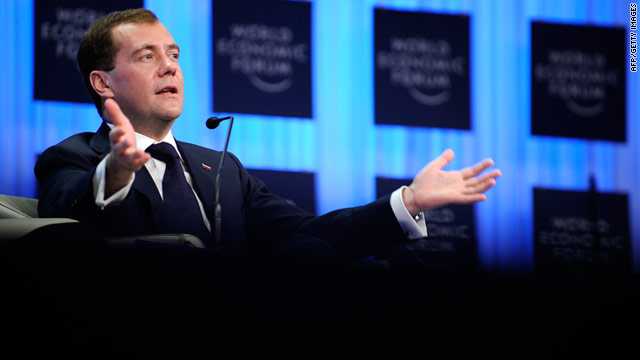 Davos, Switzerland (CNN) -- Russian President Dmitry Medvedev told business and political leaders from around the world Wednesday that his nation is trying to modernize and recognizes it has work to do.

"Russia is very often criticized. Sometimes the criticism is well deserved, sometimes absolutely not," he said in a speech at the World Economic Forum in Davos. "Russia is rebuked for the lack of democracy, totalitarian tendencies, weaknesses of legal and judiciary systems.

"Today we are the way we are, and let me tell you that Russia indeed faces many difficulties in building the rule of law, in creating a modern state of the economy," he said, adding that "major changes have taken place" and Russia is "moving ahead."

"We are learning and we are willing to receive friendly advice," the president said. "But what we don't need is lecturing -- we should be working together."

Medvedev's address was aimed at pushing foreign investment in Russia. He said his nation is engaged in "realistic efforts to improve the investment climate."

Medvedev: No one is immune to terrorism
RELATED TOPICS

His hourlong remarks began with a call for international efforts against terrorism in the wake of this week's bombing at Moscow's busiest airport that killed 35 people. Medvedev said he had not let the tragedy deter him from attending the forum to deliver the speech.

He discussed freedoms and the way that the Internet is empowering people with information and connections.

Afterward, Medvedev was asked a question that appeared to catch him off guard: If WikiLeaks were to expose something about Russia, what might it be?

He responded, "At the end of the day, I believe that this WikiLeaks story should make the spirit of international relations healthier, even if in itself this is an illegal activity in the understanding of several states."