Moscow attack renews spotlight on 'Emir of the Caucasus' 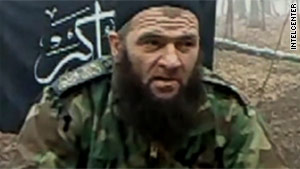 In November 2007, Doku Umarov declared himself the Emir of the Caucasus.
STORY HIGHLIGHTS

(CNN) -- There has been no claim of responsibility yet for the devastating suicide bombing at Moscow's airport on Monday -- but analysts say it bears all the hallmarks of the "Caucasus Emirate" and its leader, Doku Umarov.

Umarov, thought to be 46 years old, is a seasoned fighter who has survived more than three years as the self-styled leader of the Caucasus Emirate -- an achievement in itself in the face of a concerted campaign by Russian special forces to kill him.

His video appearances, usually made to claim credit for an attack, reveal a stocky man with craggy features and a dense beard.

Umarov was born in southern Chechnya in 1964, according to Chechen websites, and describes his family as part of the "intelligentsia." He came of age as the separatist campaign against Russian rule began to take root and joined the insurgency when Boris Yeltsin sent troops into the region in 1994.

A peace deal reached with the Russian government briefly interrupted the Chechen revolt, with leading separatists -- including Umarov -- taking up positions in government. But it was a fragile truce and after a series of bomb attacks in Russia in 1999, Moscow sent its troops back into Chechnya. Umarov and others took up arms again.

David Satter, a senior fellow at the Hudson Institute, says the Russians "had little concern for civilian casualties and used all kinds of weapons in the second war they hadn't used previously."

It changed the nature and the goals of the Chechen revolt. The Chechen rebellion began morphing into a jihad to liberate the Muslim lands of the Caucasus. (Chechnya is about 95% Muslim.) Satter says Moscow had "effectively created the conditions for Islamic terrorism while systematically eliminating those with whom it might have had a dialogue."

In 2005, Umarov gave a rare interview to Andrei Babitskii, a reporter with Radio Free Europe. Babitskii later wrote of the encounter: "The camp where Doku Umarov's small group -- just six men -- is located was nothing more than several tents scattered around a forest and a couple sheets of plastic hanging from tree branches."

Umarov had scars on his lips and chin and walked with a limp (apparently after stepping on a landmine.) He told Babitskii: "Everything they (the Russians) are doing in Chechnya is done to break the human spirit, to make people lose their humanity. And they are having considerable success with the horrific things they are doing to people."

But his message was uncompromising. "As long as we have not completely liberated ourselves from the boots of Russian soldiers, I do not see any other way out," he told Babitskii.

Medvedev: No one is immune to terrorism

And despite the hardships of a life on the run and a lack of funding, Umarov was not short of ambition. In November 2007, he declared himself the Emir of the Caucasus. In a proclamation published on a Chechen jihadist website, he declared, "It was my destiny to lead the Jihad... I will lead and organize Jihad according to the understanding, given to me by Allah."

Previously Umarov had expressly opposed terrorism. Now he began to embrace it. He revived the Riyad-us-Saliheen brigade for high-profile suicide missions. It had previously been involved in the siege of a school in Beslan and the take-over of a Moscow theater, both of which ended with heavy loss of life.

Umarov set about taking terror to the Russian heartland. Attacks claimed by the Caucasus Emirate included bombing an express train in November 2009 in which 27 people were killed. Umarov warned that "blood will not only flow in our cities and villages" but also in the streets of Russia. A subsequent suicide mission by two women at Moscow metro stations killed more than 30 people.

Andrew Kuchins of the Center for Strategic and International Studies at Georgetown University says the Caucasus Emirate's targets have shown up Russian weakness. "These are really key transport infrastructure links that you would think would be under the highest protection possible," he says.

Umarov's links with other jihadist groups, and in particular al Qaeda, have been the subject of much speculation but little certainty. Chechens have fought with al Qaeda in Afghanistan, and along with other Muslims from central Asia, are said to have joined forces with the Taliban in northern Afghanistan. The Russian authorities say al Qaeda operatives are involved in the north Caucasus.

Beyond spectacular attacks designed to bring terror to the Russian people, most analysts say the insurgents are unable to challenge the authority of the Russian state. "They're too loosely organized, the sources of the grievances of many of the groups are too different, they are more locally based," Kuchins says.

But he sees no end to the instability in the northern Caucasus. "It's like a classic frontier zone, like the FATA (the tribal areas) in Pakistan," he says. "It's very difficult to govern, and it's becoming more unstable, and that zone of instability is growing."

Umarov -- frequently reported as killed or wounded in combat -- doesn't believe he is invincible. Back in 2005 -- before he became leader of the insurgency -- he said that "for every commander who has died, someone has appeared immediately... who was young and energetic and who made you forget the loss." Even then, they were prophetic words.