Suu Kyi to Davos: Myanmar must reconnect with world 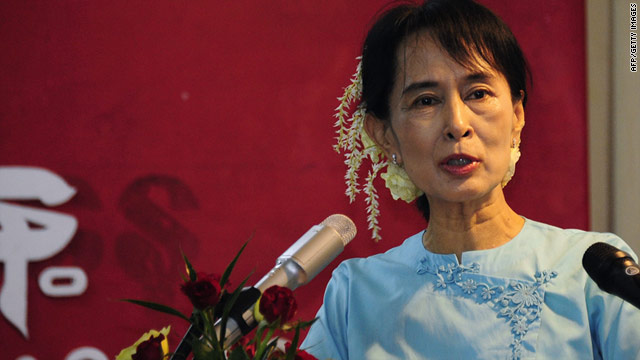 Davos, Switzerland (CNN) -- Recently freed political activist Aung San Suu Kyi has urged the world's political and business elite not to forget the people of Myanmar as they rebuild the global economy.

In a recorded message played Friday to delegates at the annual meeting of the World Economic Forum in Davos, Switzerland, Suu-Kyi said she had followed the world's response to the worst economic crisis since the Great Depression on her radio despite being under house arrest.

"While the challenges were immense, the response was both swift and strong," she said. "Of course, much still remains to be done. Our global interdependence has compelled and resulted in increased cooperation."

But with the largest country in Southeast Asia teetering on the brink of economic collapse after years of stagnation and mismanagement by the ruling military junta, the vast majority of its 55 million people live in extreme poverty.

It has also suffered from years of isolation brought about by U.S.-led sanctions -- in place since 1997 -- against the regime.

Now Suu Kyi says there is a growing desire within Myanmar to reconnect with the rest of the world.

"We yearn to be a part of the global community: not only to be economically and socially connected, but also to achieve the domestic political stability and national reconciliation that would enable us to fully address the needs of our people," she said.

The daughter of General Aung San, a hero of Burmese independence, Suu Kyi has repeatedly challenged Myanmar's regime over the years. For her efforts, she won the 1991 Nobel Peace Prize.

She was released from house arrest on November 13, after spending most of the past 20 years under house arrest or in prison. Her release came after national elections which her National League for Democracy party boycotted, describing them as a sham.

With millions of young people in particular protesting against corruption and mismanagement in authoritarian regimes across North Africa and the Mideast, Suu Kyi alluded to a similar thirst for opportunity among young Burmese.

"Our government annually spend about 40 percent of our GDP on the military and barely two percent on health and education combined," she said.

I believe that as necessary steps towards integration within the global community Burma must achieve national reconciliation.
--Aung San Suu Kyi
RELATED TOPICS

"The young people of Burma need the kind of education that has enabled Young Global Leaders, some of whom are present at this gathering, to excel so early in their careers. We need investments in technology and infrastructure.

"We need to counter and eventually eradicate widespread poverty by offering opportunities that will allow the entrepreneurial spirit of our people to be gainfully harnessed through micro lending programs," she continued.

But she also cautioned that change was only possible through unity and cooperation rather than conflict.

"I believe that as necessary steps towards integration within the global community Burma must achieve national reconciliation, political stability, and economic growth grounded in human resources development," she said.

"Without the first two which are essential for the basic requirements of good governance such as transparency, accountability, credibility and integrity, social and economic development will remain a mere pipe dream.

"I would like to request those who have invested or who are thinking of investing in Burma to put a premium on respect for the law, on environmental and social factors, on the rights of workers, on job creation and on the promotion of technological skills."