Bloody Sunday to be remembered with final march 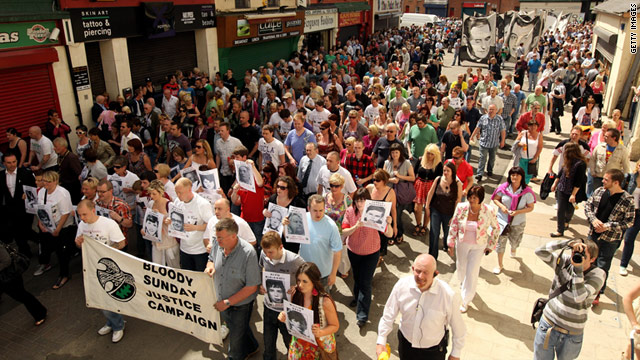 (CNN) -- Thousands of people are expected to march in Northern Ireland on Sunday to commemorate the 1972 Bloody Sunday massacre of local people by British troops.

Organizers expect it to be the last march of its kind, since the British government finally admitted last year that its troops, not the demonstrators, were to blame.

"The great lie has been laid bare. The truth has been brought home at last," the republican political party Sinn Fein said in a statement Sunday.

Sinn Fein seeks for Northern Ireland to become part of the Republic of Ireland, rather than the United Kingdom.

In June, the British government released a damning report that reversed decades of official explanations for the 1972 killings.

The paratroopers who killed 14 people had no reason to believe they were under threat from the victims, gave no warnings before firing and lied to the far-reaching official inquiry into the seminal event, the inquiry concluded.

Its report was a comprehensive rejection of the British government's official account of the killings, which had stood for 38 years.

"Some members of our armed forces acted wrongly ... and for that, on behalf of the government -- indeed, on behalf of our country -- I am deeply sorry," British Prime Minister David Cameron said after the release of the long-awaited report.

Bloody Sunday took place in the single bloodiest year of a conflict that claimed about 3,000 lives over a three-decade period known locally as The Troubles.

The killings strengthened the Provisional Irish Republican Army, increased Irish Catholic hostility towards the British army and "exacerbated the violent conflict of the years that followed," its report found.

Sinn Fein is closely associated with the PIRA, which laid down its arms as part of a 1998 peace agreement.

British troops fired more than 100 rounds on Bloody Sunday, in violation of orders issued to every soldier serving in Northern Ireland at the time, the report found.

There was some provocation by the IRA in Londonderry that day, but nothing that justified the shootings of civilians, the report found. Only one victim was associated with the IRA, and he was probably not posing a threat when he was fatally shot, the report found.

Bloody Sunday has been considered by many as one of the greatest injustices of Northern Ireland's troubled history. Even the name of the city where it happened is disputed, with pro-Irish nationalists calling it Derry and pro-British unionists calling it Londonderry.

Addressing the question of how high responsibility for the massacre should go, the report overwhelmingly placed it with the soldiers who were on the ground, along with their commander, Lt. Col. Derek Wilford, who decided to launch the incursion.

The report said there is no evidence that either the British or Northern Irish governments "intended, planned, or foresaw" the events of that day, or that either government tolerated or encouraged the use of "unjustified" lethal force.