Report: Russia to retaliate against Ireland over spy claim 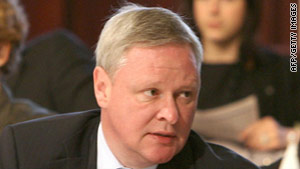 Moscow (CNN) -- Ireland's expulsion of a Russian diplomat over spying allegations is "clearly an unfriendly step that will not go unanswered," Russia's deputy foreign minister said Wednesday, according to a report.

Vladimir Titov's remarks were reported by the state-run RIA-Novosti news agency. The ministry press office told CNN it was not aware of the comment and could not elaborate.

Ireland on Tuesday rebuked Russia for "completely unacceptable" behavior and expelled a diplomat after an investigation found that the Russian intelligence services had forged Irish passports, the government said.

An investigation by the Garda Siochana police force found the Russian intelligence services made "false documents based on the acquisition of details of six genuine passports belonging to Irish citizens," and effectively stole the identities of six Irish people, the Department of Foreign Affairs said in a statement.

The probe -- launched after last year's discovery of a Russian espionage operation in the United States -- found "an entirely persuasive picture" of such activities, the statement said.

The department's secretary general met with the Russian ambassador and informed him that it is "not the behavior the government would expect from a country with which we have friendly relations," the statement said.

"The ambassador was also told that the accreditation of a named member of his staff with diplomatic status is to be terminated. ... The individual in question has been asked to leave this jurisdiction by a specified date."

The statement added, "It is hoped that it will be possible to move on from this disturbing incident and to develop further the relationship between Ireland and the Russian Federation which is fundamentally strong and which has significant potential."