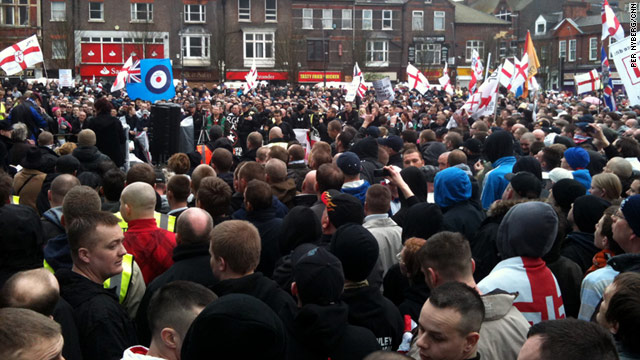 The protest in Luton was organized by the English Defence League, a far-right British organization that pushes an anti-Islamic message. It was formed in the summer of 2009 after a group of radical Muslims protested during a homecoming parade for British troops.

The crowd at the Luton protest numbered into the thousands, according to some estimates, and the protesters included members from the Swedish, Norwegian, Dutch and Scottish defense leagues. They marched to St. George's Square in central Luton, where speeches were given and protesters chanted.

Luton has had a renewed focus in Britain after it emerged that Taimour Abdulwahab, an Iraqi-born terrorist who blew himself up on a Stockholm street in December, had lived there over the past few years and studied at a local university.

A U.S. pastor, Terry Jones, who had organized a "Burn the Quran" event last September 11, had been invited to speak at the rally, but Jones' visit was canceled after UK authorities said they might not let him in the country. Jones, of Gainesville, Florida, did not carry out his plans to hold the Quran burning amid increasing pressure from U.S. and international leaders.

Police deployed some 1,800 officers, along with dogs and horses, for security. Once the protesters had reached the square, they were held there behind mobile metal doors.

A counterprotest also took place, organized by the group Unite Against Fascism, with protesters holding signs saying, "No to racism, fascism and Islamophobia." At one point, the UAF protesters tried to push through the police cordon, but officers on horses managed to keep them back and the two groups did not merge.

Incongruously, as the struggle took place, Bob Marley's "Three Little Birds" played over the loudspeaker with its lyrics: "Don't worry about a thing, 'cause every little thing is going to be all right."

Eight people were arrested, mostly on suspicion of possessing offensive weapons and assault, authorities said. No injuries were reported.

Earlier Saturday, Unite Against Fascism protesters attempted to block English Defence League protesters from entering Luton by occupying the train station, but police were able to disperse them.

The protests came on the same day that British Prime Minister David Cameron spoke on Islamist extremism and the threat it poses to security at the global Munich Security Conference in Germany. Islamist extremism differs from Islam, Cameron said, and "the ideology of extremism is the problem. Islam, emphatically, is not."

Cameron said those who advocate the West shutting itself off from the Muslim world should look to recent events in Tunisia and Egypt as an example of how Western values and Islam can be compatible.

He suggested in his speech that Britain has been too tolerant of extremism, however.

"When a white person holds objectionable views -- racism, for example -- we rightly condemn them," Cameron said. "But when equally unacceptable views or practices have come from someone who isn't white, we've been too cautious, frankly even fearful, to stand up to them. ... This hands-off tolerance has only served to reinforce the sense that not enough is shared.

"All this leaves some young Muslims feeling rootless," he said. "And the search for something to belong to and believe in can lead them to this extremist ideology."

He said that instead of ignoring extremist ideology, "we -- as governments and societies -- have got to confront it, in all its forms. And second, instead of encouraging people to live apart, we need a clear sense of shared national identity, open to everyone."