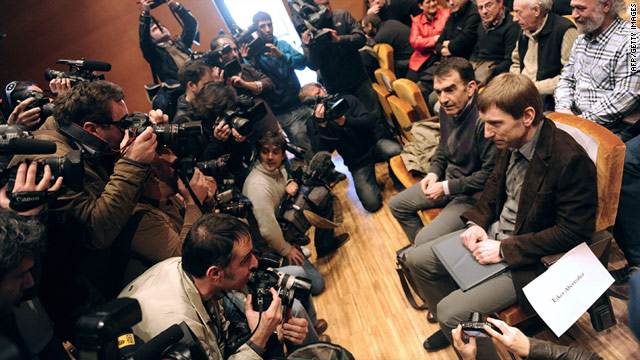 Madrid, Spain (CNN) -- Leaders of the outlawed Batasuna party on Monday publicly rejected the violence of the armed Basque separatist group ETA and said they intend to run candidates in the May 22 municipal elections in Spain.

The courts outlawed Batasuna in 2003 for being the political wing of ETA, which is blamed for more than 800 deaths in its long fight for Basque independence.

The Socialist government and the main opposition conservative Popular Party have been skeptical of Batasuna's intention to participate in the May municipal elections under a new, re-branded party name, because of Batasuna's deep historic links to ETA.

Analysts say Batasuna's effort to launch a new party -- it is expected to be registered on Wednesday at the Ministry of the Interior -- could well end up in the courts.

The courts might have to determine if the new party's condemnation of violence and the list of candidates really marks a shift from Batasuna's historic relationship with ETA. The big question is whether a decision could come in time for the new party to field candidates in the election.

The Spanish government and most opposition parties are wary of the cease-fire because ETA has broken previous unilateral truces, notably another "permanent" cease-fire in 2006, during which an ETA car bomb at Madrid's airport killed two men and caused extensive damage.

The government has said the only way Batasuna could get back into politics legally would be to either persuade ETA to completely give up its fight and lay down its weapons, or for Batasuna to make a complete, unequivocal break with ETA.

Some politicians, including from the moderate Basque Nationalist Party, praised Batasuna's step in that direction on Monday, when Rufi Etxeberria, who has long been linked to Batasuna, announced at a meeting in Bilbao that the new party, to succeed Batasuna, "rejects and opposes the use of violence, including that of ETA."

Analysts say Batasuna hopes to regain some of the many municipal mayorships and town council seats it once held in the Basque region as a means of pushing its pro-Basque independence policy. The new party, by holding elected posts, would also regain control over the levers of local power, including input or control of how lucrative municipal budgets are spent.

ETA is listed as a terrorist group by the United States and the European Union. The group wants independence for four provinces in northern Spain with historic Basque roots, along with three departments just across the border in southwest France.

Police crackdowns against ETA in Spain and in its traditional rear-guard bases in France -- and, more recently, in Portugal -- are widely credited with weakening the group, whose attacks and killings have declined sharply in the past few years.

About 800 ETA convicts or suspects are imprisoned in Spain and France, the Spanish government has said.