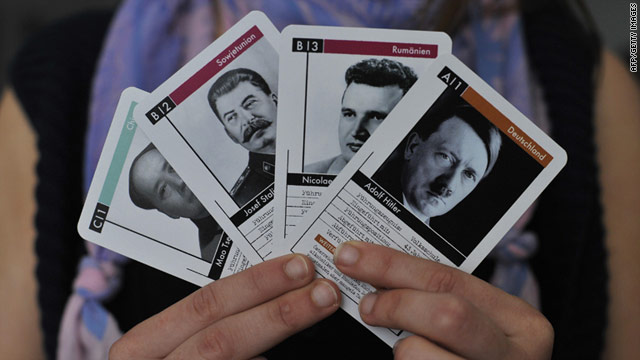 Berlin (CNN) -- Prosecutors in Germany have begun proceedings against a company that makes a card game featuring Nazi dictator Adolf Hitler, among others, they said Tuesday.

The Hitler card features a photo of the dictator and a partially obscured swastika, the Nazi party symbol -- the display of which is illegal in Germany.

"The photo as such could be problematic, but in connection with the swastika it definitely is," said Antje Gabriels-Gorsolke, chief prosecutor and spokeswoman for Nuremberg state prosecutor's office.

The state prosecutor's office became aware of the cards because they were on display at the International Toy Fair which is going on in Nuremberg at the moment.

They have ordered the cards to be confiscated. The handler has, in any case, cleared his stand.

It divides dictators into categories such as fascists, military rulers and U.S. puppets, with each card listing their age on succession to power, length of time in power, number of victims and private income.

The company that makes the game did not immediately respond to CNN requests for comment.