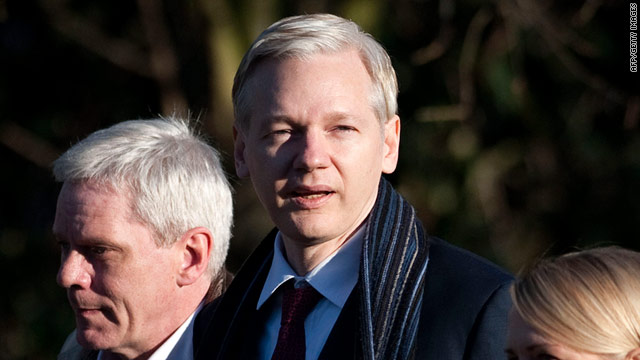 London (CNN) -- Lawyers for Julian Assange wrapped up their case against his extradition to Sweden on Tuesday and challenged a Swedish prosecutor to "come to London" to defend her handling of the sexual misconduct allegations facing the WikiLeaks founder.

"Today, we have seen a Hamlet without the princess -- a prosecutor who has been ready to feed the media within information, but has been unwilling to come here," Assange attorney Mark Stephens told reporters outside a south London courtroom. Stephens called on Swedish prosecutor Marianne Ny to attend the extradition hearing when it resumes Friday and "subject yourself to the cross-examination."

Assange has not been charged with a crime, but Swedish prosecutors want to question him in connection with sexual misconduct allegations related to separate incidents last August. Assange denies the accusations, and his attorneys are fighting his extradition on procedural and human-rights grounds.

The case is not related to the work of the website, which has facilitated the leaking of thousands of secret documents on subjects ranging from the war in Afghanistan to the inner workings of U.S. diplomacy.

Assange said the hearing is lifting the lid on allegations he says are false and have blighted his reputation for months, telling reporters after Tuesday's proceedings that he is facing "the unlimited budget of Sweden and the United Kingdom on this matter."

Assange's lawyers say Ny ordered his arrest without formally summoning him for an interview or requesting an interrogation. They also argue that Sweden could send him to the United States to face espionage charges related to his site's disclosure of thousands of secret U.S. military and diplomatic documents.

Former Swedish prosecutor Sven-Erik Alhem testified Tuesday that Swedish authorities should not have told the media that Assange was accused of rape. But Alhem seemed unimpressed by some elements of the defense, including the claim that Assange could be sent on to the United States to face imprisonment in Guantanamo Bay or execution. He said Assange did not run that risk, in his opinion.

Prosecutor Clare Montgomery, representing Sweden, dismissed the defense claim that Sweden would hand Assange over to the United States. The "suggestion that Sweden provides no protection against human rights violations is unfounded," Montgomery argued, adding that Britain would have the right to intervene if Washington asked Sweden for Assange.

Assange is free on 200,000 pounds ($310,000) bail while he fights extradition. British courts have ordered him to stay at a supporter's mansion outside London each night, to wear an electronic tag that monitors his location and to check in daily with police. Proceedings are set to resume Friday at Woolwich Crown Court in south London.

"For the past five and a half months, we have been in a condition where a black box has been applied to my life," Assange said after Monday's session. "On the outside of that black box has been written the word 'rape.' That box is now, thanks to an open court process, being opened, and I hope over the next day we will see that that box is, in fact, empty and has nothing to do with the words that are on the outside of it."

Testifying for the defense on Monday, retired Swedish Court of Appeals judge Brita Sundberg-Weitman harshly criticized Ny, who issued an arrest warrant for Assange in the case. Sundberg-Weitman said Ny has a "rather biased view against men" and has "lost balance" on sexual offenses after years of working with battered women.

Sundberg-Weitman said Ny could have pursued more straightforward approaches, such as questioning by telephone, for the preliminary investigation. And Bengt Goran Rudling, a Swedish activist for legal reform in sex-offense cases, testified that he approached police to raise doubts about one of Assange's accusers. Rudling said the woman, identified as "Miss A," made Twitter postings 20 hours after the alleged offenses that described being positive and happy in Assange's company.

Assange's lawyers argue Britain cannot extradite Assange without violation of his human rights, because doing so puts him at risk of execution, according to an outline of their defense published on their website.

"There is a real risk he could be made subject to the death penalty," Assange lawyers say, citing British media reports that U.S. Republican politicians Sarah Palin and Mike Huckabee have called for him to be executed.

They also say he should not be sent to Sweden because rape trials there are held behind closed doors, while British trials are open.

Rudling said Miss A erased the postings when she reported the alleged crime, but prosecutors said Miss A told Rudling she deleted them to avoid a media storm.

Rudling also said that that two days after the alleged crime, Miss A wanted to become Assange's personal press liaison officer. He told CNN he is not an Assange supporter.