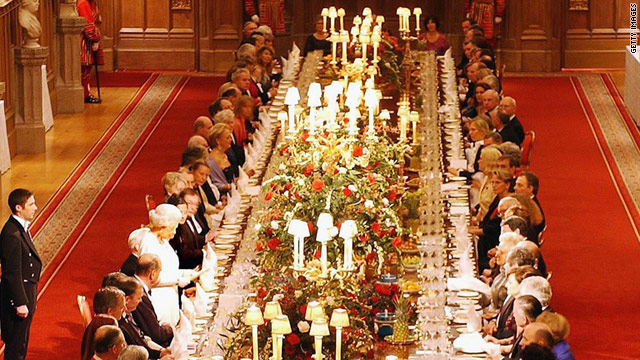 The reception isn't expected to be as formal as other royal occasions.
STORY HIGHLIGHTS

He prepared Prince William's favorite meals at Kensington Palace and served Fergie strawberries and cream on her wedding day. So what does former royal chef Darren McGrady expect to see on the April 29 wedding menu?

McGrady, who served as Senior Chef at Buckingham Palace and later worked in the kitchen at Kensington Palace for the remainder of Princess Diana's life, expects a mix of traditional English fare and Prince William and Kate Middleton's favorites.

Immediately following the 11 a.m. ceremony, guests will be invited back to Buckingham Palace for a wedding breakfast of champagne, canapes and heavy h'ors d'oeuvres, such as smoked salmon, pate and mini sausage rolls which were, "always popular at the Palace -- one of the first to go," notes McGrady.

He also expects a somewhat simpler spread than those featured at royal weddings past, like Charles and Di's. "The royal family will not want to be seen as going backwards and actually having a big, seven-course meal with a soup course and a fish course," he says. "They will want to make it more modern."

I used to listen to William tell me that when he grows up, he's going to be a police motorcyclist
--Darren McGrady
RELATED TOPICS

As such, theirs will be a simpler meal, perhaps like the one served at Prince Edward's June 1999 wedding to Sophie Rhys-Jones.

At the evening dinner and dancing reception, a smaller group of family, close friends and visiting heads of state will be treated to a more substantial buffet, McGrady predicts. "They like to showcase British food, so there might be Gaelic steaks with braised rice. But I wouldn't be surprised if cottage pie is somewhere on the menu."

That dish, made of ground beef in a brown sauce and topped with creamy mashed potatoes and melted cheese, "was William's all-time favorite," he says.

But McGrady was feeding the young prince (he cooked breakfast, lunch and dinner for the boys five days a week) long before he was even able to name a favorite dish.

"I cooked pureed vegetables for William and Harry as tiny babies," he recalls. And when they were older, "I used to listen to William tell me that when he grows up, he's going to be a police motorcyclist," says McGrady.

"I said to him, 'William, I think they've got other plans for you."