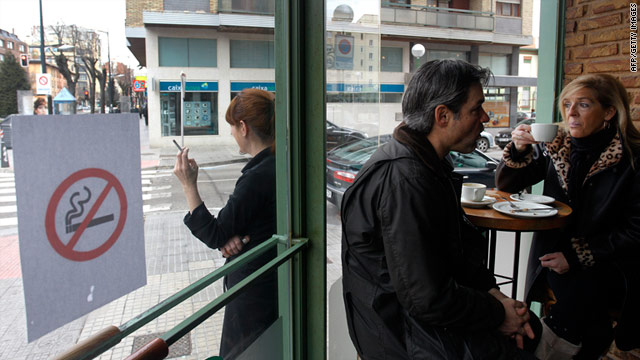 Madrid, Spain (CNN) -- Authorities on Thursday ordered the closure of a restaurant for repeatedly violating the nation's tough new anti-smoking law, the first such shutdown in Spain, officials told CNN.

The owner of the restaurant -- El Asador Guadalmina near the popular southern Mediterranean resort of Marbella -- earlier this week defiantly told Spanish media he would not pay a nearly $200,000 fine for allowing clients to smoke in his locale, despite the new law which prohibits smoking in all indoor bars and restaurants.

"This restaurant has been in non-compliance since the law began," said a spokesman for Spain's national health ministry. "From what we know, this is the first case in the country" of a restaurant closure order.

Health inspectors made two visits to the restaurant Thursday, the first time leaving an order to close the establishment and the second time accompanied by two police officers, CNN affiliate Cuatro TV reported from the scene.

But restaurant owner Jose Eugenio Arias dug in his heels, telling a throng of reporters outside the restaurant on Thursday, "No one is going to close my business. I will fight 'til the end. I'm using my constitutional rights as a citizen and I'm not going to be run over by this dictatorial, Marxist, terrorist government."

The restaurant remained open Thursday evening before the Spanish dinner hour, and some clients could be seen smoking inside. But the CNN affiliate's reporter on the scene said local authorities were not willing to wait much longer and warned they could send the police to shut the locale.

Even before the new smoking law took effect January 2, the restaurant posted signs reading, "As a private business, making use of what we understand to be our rights, this law will not be applied in our establishment."

The signs went on to accuse Spain's Socialist government of using the new law as a "smoke screen to cover up seven years of massive destruction in Spain," apparent references to the country's deep economic crisis and to the two terms of the elected government.

The restaurant owner, Jose Eugenio Arias, has since formed an association called Reform or Be Ruined, trying to build support among other bar and restaurant owners for non-compliance with the law.

The law puts Spain in line with the strictest European countries, Britain, France and Italy, which prohibit smoking in all enclosed public spaces.

The Spanish government says most of the nation's bars and restaurants are complying with the ban. Many have added to their outdoor terrace space, or put in outdoor heating, so that clients can step outside for a smoke, where it is allowed.

Arias told Cuatro TV in an interview earlier this week that he had no intention of paying the nearly $200,000 fine, and he vowed to fight any attempt to limit his decision to permit clients to smoke in his restaurant.

Arias has 15 days to appeal the administrative order to close his restaurant, the Andalusia health department spokeswoman said.