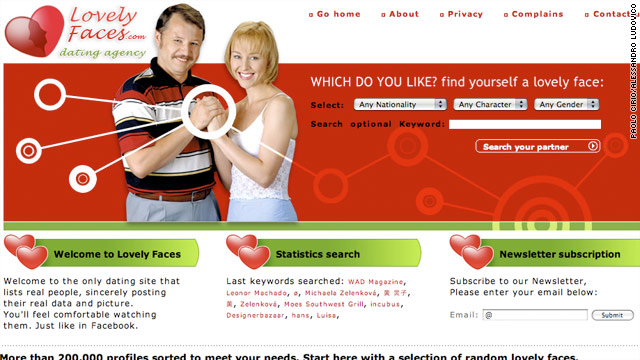 London, England (CNN) -- An Italian artist duo responsible for "scraping" profiles from Facebook for a mock dating website have been asked by Facebook to cease their activities.

Digital artists Paolo Cirio and Alessandro Ludovico revealed to CNN that the billion-dollar corporation issued them with a "cease and desist" letter regarding the mock site, which is called Lovely-Faces.com.

At the time of writing, the website was temporarily unavailable, though Cirio and Ludovico are seeking legal advice on the status of their "conceptual art provocation," which they say uses publicly available information and is therefore legal.

Scraping is a way of grabbing the computer code that makes up the words and images you see on a web page, which can then, for example, be presented on other websites.

In a prepared statement to CNN, a spokesperson from Facebook said: "Scraping people's information violates our terms. We have taken, and will continue to take, aggressive legal action against organizations that violate these terms.

"We've already been in touch with Lovely-Faces to demand that they delete the data and we will take additional action as necessary."

Digital artists Paolo Cirio and Alessandro Ludovico are used to getting into tussles with some of the biggest online corporations in the world, including in the past giants like Google and Amazon.

I like to demonstrate how this information could be copied, could be manipulated, could be arranged, can be shaped, in a way
--Artist Paolo Cirio

Their work, they say, exposes the "vulnerability" both of people's online data and the internal mechanisms of major internet companies -- as well as questioning the ownership of the data they use.

Lovely-Faces.com, part of the artists' Face to Facebook project, was two years in the making and was unveiled as part of an installation at the digital art festival Transmediale in Berlin.

It involved using automatic browsing software to select one million Facebook profiles, and then cutting-edge face-recognition software to match profile pictures according to gender and a bizarre variety of social traits and types.

"I like to demonstrate how this information could be copied, could be manipulated, could be arranged, can be shaped, in a way," said Cirio.

"You usually meet a boyfriend or girlfriend (because they) are friends of friends in real life. That is actually what Facebook is -- a dating website," he said.

Cirio and Ludovico say they have removed around 100 pictures of people who have so far complained, but they say they have also received many messages of support.

"Our projects are just pointing out how the internet world is vulnerable and that data -- it's not just that it should be free, it's just free by itself," said Cirio.

Face to Facebook is the final project in the artists' series of provocations, entitled "Hacking Monopolism Trilogy."

Previous projects are "Google Will Eat Itself," which involved getting revenue from clicks on ad banners on Google owned by the artists and then using that money to purchase shares in Google -- "using their money to buy themselves," said Cirio.

The other was called "Amazon Noir," which used software robots to reconstruct entire books using Amazon's "Search Inside" program. The books were then turned into PDFs and distributed for free online.

The artists write on their website, face-to-facebook.net, "In all of (the projects) we stole data that is very sensitive for the respective corporations.

"In all the three projects, the theft is not used to generate money at all, or for personal economic advantage, but only to twist the stolen data or knowledge against the respective corporations."

While Google sent the artists a "cease and desist" letter, Amazon did not. Cirio hazarded that perhaps they were embarrassed by the fact that they had been outsmarted. CNN asked Amazon for a response, but hadn't had a response at the time of publishing.

The artists are taking a break from such provocations and at the time of writing, are still dealing with the fallout from their Facebook project.

Asked whether they have plans for future provocations, Ludovico said: "We will see -- this was the last project in the trilogy and it took a lot of resources and also nerve."

But, they say, the nature of the internet means that they will never be without subject matter.

"Tomorrow Facebook will be gone and who knows about Google? They are the most powerful now, but I don't know about tomorrow," said Cirio.