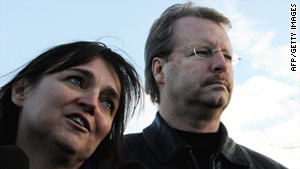 Curt Knox and Edda Mellas speak to the media on December 5, 2009, as they leave Perugia's prison.
STORY HIGHLIGHTS

Rome (CNN) -- The parents of Amanda Knox, an American convicted of murdering her British roommate in 2007, were indicted Tuesday for allegedly libeling police in Perugia, Italy, Knox's mother and the family's Italian attorney said.

In a 2009 interview in the Sunday Times of London, Curt Knox and Edda Mellas said that their daughter "had not been given an interpreter, had not received food and water and had been physically and verbally abused" by police after her arrest for the murder of British exchange student Meredith Kercher, according to Italy's ANSA news agency.

They also said police struck her and told her "things will get worse for you" if she requested an attorney.

"Yes, I am going to trial for libel ... along with one of my lawyers and a group of journalists," Mellas told CNN Tuesday.

"We are very upset by this decision," said Luciano Ghirga, Amanda Knox's attorney who represents her family in this case. "We worked towards a dismissal because there was no intent" on the part of Knox's parents to libel the police, he said.

The indictment says their claims were "contrary to the truth," according to ANSA.

A hearing in the case is set for July 4, Ghirga said.

"These are old charges," said David Marriott, spokesman for the family. "They've been around since 2009." The story in question was published in 2008, he said, and Knox's parents were repeating what their daughter had told them.

The indictment, Marriott said, finalizes the charges the prosecutor had filed and is "nothing surprising."

Knox's parents' focus is not on their case, he said, but on her appeal of her conviction, which is under way. There is a break in the proceedings for experts to retest forensic evidence, he said.

"This is, I guess you'd call it, a bit of a minor distraction," Marriott said.

Knox, 23, was sentenced in December to 26 years in prison for Kercher's death at the villa the two shared in Perugia, the central Italian town where both were students.

Kercher, 21, was found dead in November 2007, semi-naked with her throat slashed. Knox and her former Italian boyfriend, Raffaele Sollecito, were both found guilty of the murder.

Sollecito is serving a 25-year sentence. A third person, Rudy Guede, a drifter originally from the Ivory Coast, was tried separately and is serving a 16-year prison sentence.

The forensic experts retesting evidence as part of Knox's appeal must conclude their analysis by May 9 and their results are to be presented on May 21 to a jury composed of two judges and six citizens.

Evidence being retested includes a knife found in Sollecito's apartment with Knox's DNA on the handle and what Perugia prosecutors say is Kercher's DNA in a tiny groove on the blade. The prosecution contends that the knife was used to stab Kercher in the neck and that it had been cleaned. The DNA matter attributed to Kercher consists of flesh, not blood, they say.

The sample, however, was so small that forensic scientists investigating Kercher's murder were not able to double test it in accordance with international forensic science norms, which Knox's legal team says raises doubts about its validity.

The second piece of evidence the forensic experts will test is the tiny metal clasp from Kercher's bra, which was cut from her body after her slaying. Forensic scientists in the investigatory phase determined that Sollecito's DNA is present on the metal clasp. The clasp was identified on an investigatory video on November 2, 2007, when Kercher's body was found. But the clasp was not collected until nearly six weeks later, giving the defense cause to question whether the sample may have been contaminated.

The court is not expected to make a final ruling on the appeal until next summer.