Opposition party ahead in Ireland elections

By Peter Taggart, For CNN 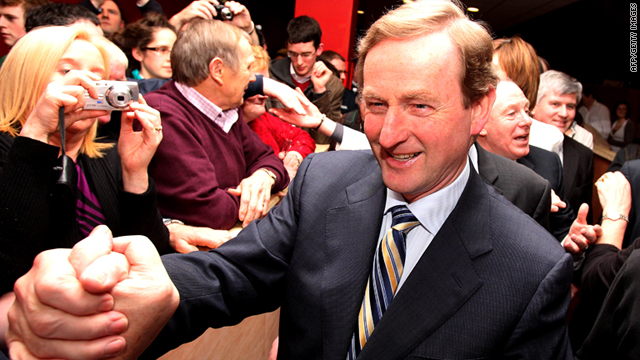 Enda Kenny, leader of the Fine Gael party, meets supporters as he arrives at the ballot count center in Castlebar on Saturday.
STORY HIGHLIGHTS
RELATED TOPICS

(CNN) -- A picture was emerging Sunday of a dramatic transformation of Irish politics in the country's first election since a multi-billion-dollar economic bailout.

The country's main opposition party is now the largest parliamentary seatholder, election officials confirmed Sunday, while Fianna Fail -- the party that has ruled for 60 of the past 80 years -- appeared headed for its worst election ever.

The results appear to clear a path for center-right Fine Gael leader Enda Kenny to become Ireland's next prime minister.

Senior party members said he is likely to enter negotiations with the center-left Labour Party about forming a coalition government.

The Dublin government late last year negotiated an 85-billion-euro ($113-billion) loan package from the European Union, International Monetary Fund, and individual European nations as the crippling cost of bailing out its banks during the financial crisis took its toll on national coffers.

Many voters blamed Fianna Fail for the country's monetary woes, and Irish prime minister Brian Cowen was so unpopular he had to step down as leader of Fianna Fail before the election.

His likely replacement as prime minister, Kenny, had made it clear during the election campaign he would try to renegotiate the terms of the international bailout.

However, given the dire state of the country's public finances, the new government will have no option but to continue with austerity measures.

He gambled his political future by moving from Northern Ireland to stand in the Republic for the first time. He scored a significant victory, topping the poll in his constituency of Louth on the first count in the proportional representation election.