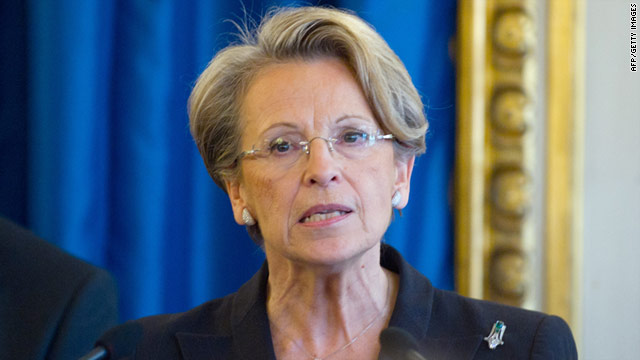 Alliot-Marie resigned Sunday after criticism over her contacts with the former Tunisian regime.
STORY HIGHLIGHTS

Paris (CNN) -- When a French evening TV program recently debated how well the nation's diplomatic service handled the uprisings around the Middle East, the show's host found himself inundated with caustic viewer comments and e-mails.

Most centered around one uncomfortable question: How did France, with its close historical, economic and political ties to North Africa and the Middle East, miss the warning signs that revolution was brewing beneath the calm surface of countries where many French were pleasantly spending their winter holidays?

Even Michele Alliot-Marie, the now-retired French foreign minister, had to admit in early January that the French government had no idea trouble was in the works.

"As politicians, we were all surprised by the rapidity of the sequence of events," she said of the Tunisian uprising, "by the speed of this Jasmine Revolution, but so were journalists, analysts, diplomats and researchers.

"A priority of my department will be the need to strengthen its capacities to better anticipate situations."

Alliot-Marie departed her post Sunday after she was criticized for her ties to ex-Tunisian President Zine Ben Ali and a remark that she made when rioting began in Tunisia that law and order might be maintained with French know-how -- suggesting to some that she was in favor of sending French troops to prop up the Ben Ali regime.

Alliot-Marie may have gone but it seems very likely that priority she identified will remain -- especially since there has been withering criticism of French diplomacy in recent months over a number of problems.

Former Foreign Minister Dominique De Villepin, for example, said events in the Middle East might have been foreseen if there had been stronger French embassies in place.

"The unwritten rule for ambassadors in Arab countries and Africa" De Villepin said on French radio, "is that they should not contact the opposition, they are extremely vigilant about observing the current authority, and they understand the need for stability.

"This rule must change, our ambassadors must engage with civil society, they must have increased contact."

That opinion is apparently shared by Jean-Christophe Rufin, French ambassador to Dakar, Senegal until last year when he resigned after President Abdoulaye Wade asked France to remove him.

"When I was appointed ambassador I was convinced we were on the verge of a real transformation regarding our relations with Africa," Rufin said. "That's why I joined. Nicolas Sarkozy had expressed a clear willingness to break with the past... But today, I feel that we risk missing a historic opportunity. From 2007 to 2010 I have seen all the old dealings of the Franco-African relationship."

Rufin added that because of significant budget cutbacks at the French foreign ministry it was now "a damaged ministry," with its domestic staff and global network of emissaries "in complete disarray."

Along the same lines, an editorial in Le Monde last July, co-authored by Alain Juppe, who is now starting his second stint as French foreign minister, and Hubbert Vedrine, who held the post under President Francois Mitterand, also expressed their concerns over France's successive budget cuts and staff reductions.

They wrote that budget constraints were having "a devastating effect" on France's diplomatic tools and that this was "visible everywhere in the world."

Just six months later, France, a nation which takes pride in believing that its Cardinal Richelieu invented modern diplomacy, was nonetheless blindsided by the sudden uprisings around the Mediterranean and elsewhere.

While it is true that other countries also missed the story which was seen on CNN and other 24-hour news networks long before it appeared in diplomatic cables, that is no solace to many French who have long taken pride in the quality of their diplomacy.

A recent poll published in French daily Dimanche Ouest showed that 44 percent of French people believe France's diplomacy has been weakened after the recent revolts in Arab countries.

But for all democratic countries there remains the thorny question of how to maintain ties with less than democratic leaders -- and at the same time monitor and perhaps even encourage the movements that are trying to overthrow them.