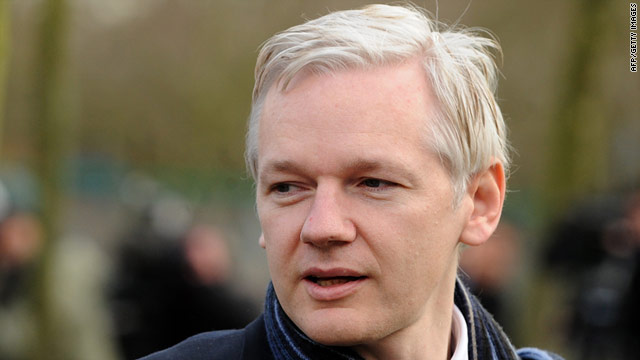 Julian Assange has maintained that allegations he committed sex crimes in Sweden are an attempt to smear him.
STORY HIGHLIGHTS

London (CNN) -- Lawyers for WikiLeaks editor-in-chief Julian Assange have filed an appeal against his extradition to Sweden to face questioning on sex charges, a member of his defense team said Thursday.

The appeal was submitted to London's High Court on Tuesday, but lawyers do not expect the case to be heard for another two or three months, said Jennifer Robinson, who is part of Assange's defense team.

A judge at Belmarsh Magistrates' Court ruled on February 24 that Assange should be extradited from the United Kingdom to Sweden to face allegations of sex crimes.

He says the charges are an attempt to smear him.

The case is not related to the work of Assange's website, which facilitates the publication of secret information. It made headlines last year for leaking documents and videos related to the wars in Iraq and Afghanistan, and thousands of U.S. diplomatic cables.

At a news conference after the judge's extradition ruling last month, he lashed out at the decision.

He said to thrust someone into a foreign land where someone does not speak the language or understand the judicial system "is a very grave matter."

Assange has not been charged with a crime, but Swedish prosecutors want to question him in connection with sexual misconduct allegations related to separate incidents in August.

Assange denies the accusations. His attorneys are fighting his extradition on procedural and human-rights grounds.

Judge Howard Riddell, however, dismissed almost all the arguments by the defense.

He ruled that the allegations against Assange are extraditable offenses.

He disagreed with Assange's lawyers that Swedish prosecutor Marianne Ny did not have the authority to issue a European arrest warrant and ruled that the warrant was valid.

Riddell also tossed out claims that Assange would not be able to obtain a fair trial in Sweden or that Swedish prosecutors had not made any effort to promptly interview Assange before he left Sweden last year.

"In fact this is untrue," the judge said in the ruling. He said Assange's Swedish lawyer Bjorn Hurtig had made a "deliberate attempt to mislead the court" and that it was Assange who had avoided interrogation before he left Sweden.

"It would be a reasonable assumption from the facts that Mr. Assange was deliberately avoiding interrogation before he left Sweden," Riddell wrote.

Assange's lawyers have raised the possibility that Sweden would hand him over to the United States if Britain extradites him to Sweden.

CNN's David Wilkinson and Andrew Carey contributed to this report.