Chilling out with the world's only ice musician 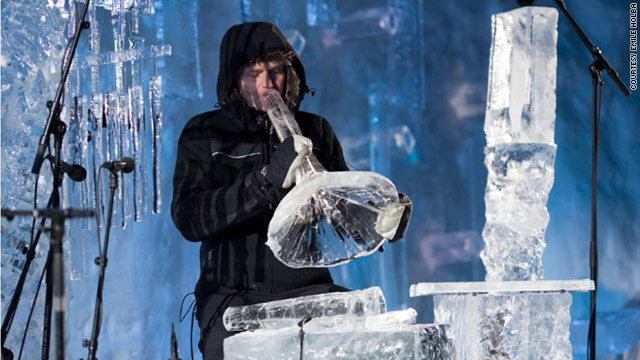 London, England (CNN) -- He's played concerts inside frozen waterfalls, on top of 3,000 meter high glaciers and inside massive ice-domes -- at temperatures as low as -33 degrees Celsius.

Although it may sound strange, for Terje Isungset, the world's first and only ice musician, these conditions are all part of the job.

The Norwegian-born musician has been playing ice instruments for over 10 years and is the founder of Norway's annual Ice Music Festival in Geilo. His love of ice music began in his 20s when he was invited to play at a concert inside a frozen waterfall.

"As a composer I decided to work with the nature surrounding me and I tried out ice instruments for the first time," said Isungset.

You have to move all the time, because if you stop, you will just freeze.
--Even Rygg, ice extractor.

A percussionist, Isungset started with simple ice chimes, using stalactites which had formed naturally in the harsh Norwegian winter. Since then his repertoire has expanded to include ice drums, horns, harps and trumpets.

But as well as playing, Isungset has also crafted various instruments in ice form.

"I have challenged friends of mine to perform on ice and given them ideas of what to do. I've made ice guitars, ice marimbas, an iceridoo (didgeridoo) and traditional Norwegian langeleiks," he said.

Rather than having a favorite instrument, Isungset says he takes joy in finding ice in nature that can "sing."

"When I can find a piece of ice that can sing for a very long time, it's special. The longest tone I have made from hitting a piece of ice is about 15 seconds. It's very unique."

But perhaps the most extraordinary of all Isungset's instruments was his 2,500-year-old ice horn, carved from a glacier in Norway. It lasted only 50 performances, but by ice standards that's a long time.

"We normally make an ice horn out of a large cube. We cut it with a saw and then with a knife," Isungset told CNN.

"The shape of (the horn) is not so important, except for the mouth piece because the mouth piece creates a specific sound. But, as you can imagine, when you play an ice horn it melts. So the tuning and the mouth piece will change all the time. This makes it even harder to perform."

How long an ice instrument can last all depends of the length of the performance and the weather on the day, but they usually only last a couple of concerts.

"With ice, there is no exact time for anything, nature decides everything," said Isungset.

"I'm always searching for pieces of ice that can make a sound, so I'm working on a piece of ice and I'm listening to it all the time. It's kind of a communication between me and the piece of ice."

With ice, there is no exact time for anything, nature decides everything.
--Terje Isungset, ice musician.
RELATED TOPICS

For Isungset, instruments should only ever be crafted from naturally formed ice. While gathering sheets of ice for smaller instruments is relatively straight forward, sourcing naturally formed blocks big enough to sculpt a horn or trumpet is a difficult and dangerous job.

For this, Isungset enlists the help of Even Rygg.

Armed with a snowmobile, shovel and various chainsaws, Rygg visits the lakes up in the Norwegian mountains in order to find the best possible ice.

"I have to do a lot of testing first because not all ice makes sounds. Some ice is dead when it comes to sounds because there are too many air bubbles," said Rygg.

Although finding the ice many not be difficult, extracting it is. Usually Rygg works on lakes which hold ice around 60-70 cm thick. The chances of falling through are slim, but the work is still dangerous, with each block taking around six hours to extract.

"It's a mix of the best job in the world, but also the worst job at the same time," said Rygg.

"You're surrounded by beautiful nature, you see the sun coming up and you often see animals such as moose and elks. But it's -20 degrees, you're soaking wet and you know you have to stand there for two more hours.

"You have to move all the time, because if you stop, you will just freeze. One time I was up there for 18 hours and when I took off my jacket it was so frozen it looked like I was still wearing it. That was really cold."

But after all the hard work, no matter how perfect the quality of the ice or how well it is shaped, every concert is in the hands of nature says Isungset.

"Every concert is unique and it's nature that defines your performance. Nature decides the sound of the instruments on the day."

The Ice Music Festival's official photographer was Emile Holba. You can view Holba's photos by visiting his website.