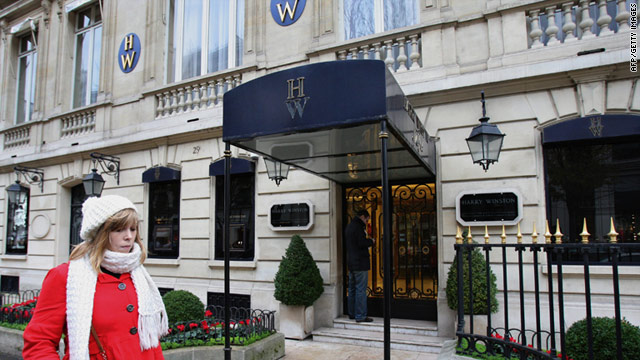 Four armed robbers stole an estimated $111 million worth of gems and money from Harry Winston's store in Paris in 2008.
STORY HIGHLIGHTS
RELATED TOPICS

Paris (CNN) -- French police have recovered gems stolen during a burglary from luxury jeweler Harry Winston's store in Paris in 2008, they announced.

The loot, worth 18 million euros (about $25 million) was found hidden in a rain sewer at a house in Seine-Saint-Denis, a Paris suburb, the Paris police said Tuesday.

Nineteen rings -- including one valued at six million euros ($8.3 million) -- and three pairs of earrings had been put in a plastic container and set in a cement mold inside the sewer.

The robbery in 2008 was carried out by four armed robbers -- two of them disguised as women -- who walked into the jewelry store near the Champs Elysees and swiped an estimated 80 million euros (about $111 million) worth of merchandise in the space of 15 minutes.

Police did not say how they found the cache they recovered in the sewer.

But they detained and questioned 25 people in connection with the heist in 2009 and said that half the loot had been recovered.

French media report that nine of the 25 have been charged. Paris prosecutors did not immediately respond to CNN requests for comment.

Police did not say if all the stolen goods have now been recovered with the latest find.