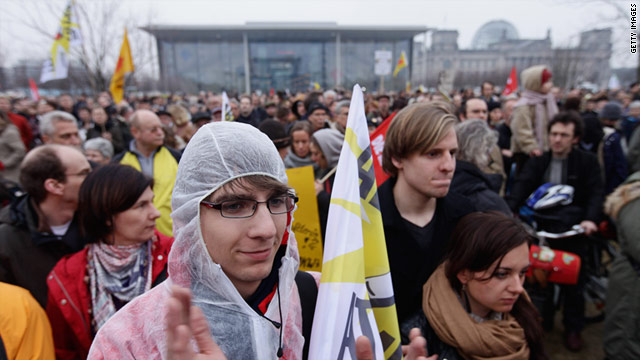 Anti-nuclear activists demonstrate in front of the German Chancellery on the evening of Monday, March 14.
STORY HIGHLIGHTS

The protests were staged in Berlin and other cities days after a powerful earthquake damaged nuclear plants in Japan and spurred fears of radiation there.

Thorben Becker of the Federation for Environmental Protection, an environmental group, said the movement had received a major boost from the crisis in Japan.

Becker said more than 100,000 turned up in more than 400 cities. There were hundreds of people at the Berlin protests and shouts of "turn them off," a reference to German nuclear reactors, rang through the demonstration.

On Saturday, protesters formed a 45-kilometer human chain between Stuttgart and the nuclear power plant Neckarwestheim. Police said around 60,000 people showed up for the protest, organized by various anti-nuclear organizations.

German Chancellor Angela Merkel has announced a three-month moratorium on the extension of the operation periods for German nuclear plants.

Germany opted out of nuclear energy during the Gerhard Schroeder administration and the country is waiting for the operational periods of its nuclear plants to expire.

But the more pro-nuclear Merkel government, which succeeded the Schroeder administration, had passed a law extending the lifespan of the plants.