Airbus under investigation for involuntary manslaughter in 2009 crash 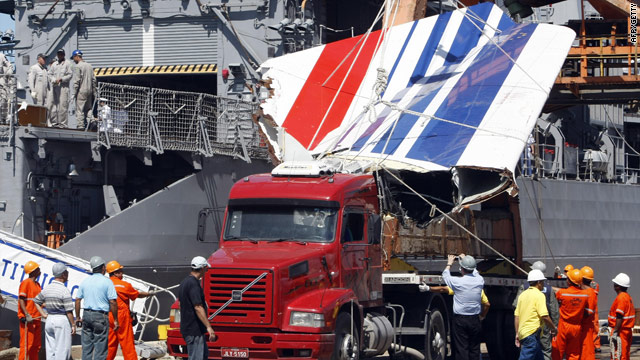 The tail fin of the Air France Airbus A330 is recovered two weeks after it crashed in the Atlantic Ocean in June 2009.
STORY HIGHLIGHTS
RELATED TOPICS

Paris (CNN) -- A French magistrate is investigating Airbus for involuntary manslaughter in connection with the mysterious 2009 crash of Air France Flight 447 into the southern Atlantic Ocean, according to the airline manufacturer and a court spokeswoman.

Judge Sylvie Zimmerman is presiding over the inquiry into the Airbus-made plane, court spokeswoman Sylvie Polack told CNN on Thursday. The plane fell into the sea while traveling from Rio de Janeiro to Paris, killing all 228 people aboard.

Thomas Enders, CEO of Airbus, disagreed with the decision to commence the investigation, he said in a statement.

"On behalf of Airbus, I have noted the absence of facts supporting this step and stated our strong disagreement," Enders said.

"Airbus maintains that the focus should be on finding the cause of this accident and making sure it can never happen again. Airbus will continue to support the investigation, including the continued search for the flight recorders, which is the only sure way to know the truth," Enders said.

Investigators have not yet established what caused the crash, and large parts of the plane -- including both flight recorders -- have never been found, despite an extensive search operation that included a French navy submarine.

The plane went down in stormy weather, and most of the bodies were never recovered.

Studies of the debris and bodies that were found led France's air accident investigation agency, the BEA, to conclude the plane hit the water belly first, essentially intact.

Oxygen masks were not deployed, indicating that the cabin did not depressurize, the BEA revealed in a 2009 report.

Automated messages sent from the plane in the minutes before the crash showed there were problems measuring air speed, the investigators said, though they said that alone was not enough to cause the disaster.

The area where the plane went down is far out in the Atlantic -- two to four days by ship from the nearest ports in Brazil or Senegal in West Africa. The rough underwater terrain includes mountains and valleys, the BEA said.