Moscow calls for cease-fire in Libya as Gates visits 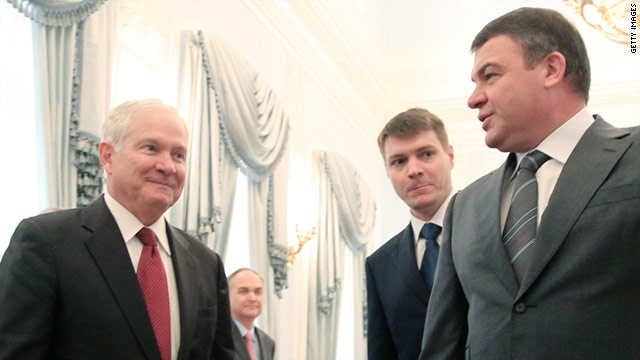 St. Petersburg, Russia (CNN) -- Tensions between the United States and Russia over coalition airstrikes in Libya broke back into the open Tuesday, with Moscow calling for an immediate cease-fire to protect civilians and Washington saying that the claims of Libyan casualties were Gadhafi lies.

"We urge all belligerent parties to stop the violence," Serdyukov said.

Gates, in his own comments after what he called "productive discussions" with the Russian defense minister, said he assured Serdyukov that the United States is committed to enforcing the no-fly zone over Libya and protecting civilians.

Later, in comments to journalists traveling with him, the U.S. defense secretary pushed back at the Russian criticism, saying he was "curious" about the tone that has been taken.

"It is perfectly evident that the vast majority, if not nearly all, civilian casualties have been inflicted by (Libyan leader Moammar) Gadhafi."

Gates said virtually all the targets are in isolated, non-populated areas and air defense sites.

"We've been very careful about this," Gates said.

"It's almost as though people here are taking at face value Gadhafi's claims about the number of civilian casualties, which, as far as I'm concerned, is just outright lies," he charged.

Gates arrived in Moscow earlier Tuesday as Russia's two most powerful leaders publicly argued over the U.S. and allied mission in Libya.

Gates is set to meet and have dinner with Russian President Dimitri Medvedev Tuesday evening.

Not on his schedule is Prime Minister Vladimir Putin, who Monday delivered a scorching critique of the attacks on Libya and the United Nations resolution that authorized the United States and allies to launch the mission.

Gates also predicted that the allied attacks would scale back soon.

"It just seems logical that once we have the air defense system sufficiently suppressed that the level of military activity would decline."

He suggested there would be a transfer of coalition leadership shortly, as well.

"It will be other members of the coalition that on a day-to-day basis will be sustaining the no-fly zone."

Monday, Putin compared the U.N. resolution to a medieval appeal for a crusade. Under Medvedev, Russia abstained from the U.N. vote, stopping short of a veto that Putin might have preferred.

Gates has stayed on the sidelines of the Medvedev-Putin clash. In public events Monday, he avoided speaking about Libya and told Russia's Interfax news agency that the United States only wants a limited role in the Libyan mission.

"While we have had a major role in the first two or three days, I expect us very soon to recede back into a supporting role with other nations carrying a significant proportion of the burden in -- implement and enforcing the no-fly zone," Gates said in the Interfax interview, according to a transcript provided by the Defense Department. "And the president has made very clear the United States will not put any forces in Libya, on Libyan soil."

Gates has maintained that Gadhafi's fate is in the hands of his people.

"I think it's pretty clear to everybody that Libya would be better off without Gadhafi. But that is a matter for the Libyans themselves to decide," Gates told Interfax.