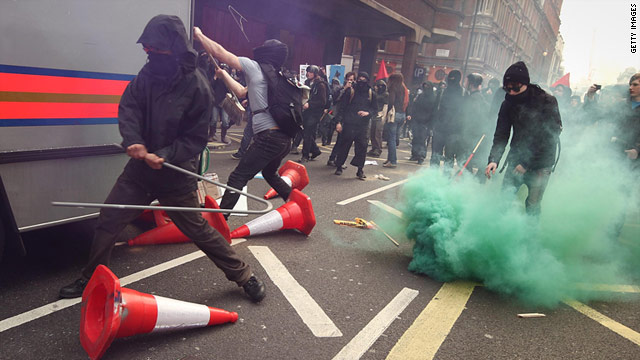 Thirty-one police officers were hurt during the protests, with one being treated in the hospital, they added. Police said another 53 people were injured, at least 15 of which were taken to the hospital.

The Trades Union Congress (TUC), which organized the demonstration, said nearly half a million people were taking part, far exceeding their original estimate of 100,000 participants. London's Metropolitan Police would not give an estimate of the number of participants.

"Banker's greed or people's needs -- Cut bonuses not benefits" read one placard at the protest. "Strike together to bring down the government" read another.

The march was largely peaceful apart from isolated skirmishes between protesters and police, authorities said.

"The main TUC march has been going well. We have had more than a quarter of a million people with hardly any problems," Police Commander Bob Broadhurst said.

"Unfortunately we have had a group of approximately 500 criminals committing some disorder ... and scaring the public who are trying to shop. That has been concerning but we are on top of it."

He said some of the protesters threw paint at a clothing store on Oxford Street and at the police. Protesters also threw light bulbs filled with ammonia at officers after they intervened to stop paint and bottles being thrown at store windows, police said earlier.

Protesters also damaged branches of the HSBC and Santander banks and overturned trash cans. Protesters then made their way to Piccadilly Circus and the nearby Ritz Hotel, where they swarmed the famous entrance arcade.

They smashed a nearby Starbucks Coffee window and spray-painted anarchy symbols on the front. Police lined up at the sandwich shop next door to stop further damage.

Police also set up a so-called "containment" area Saturday night in Trafalgar Square, where police said officers were coming under "sustained attack." Protesters were later being allowed to leave the square in small groups.