By Peter Taggart, Special for CNN 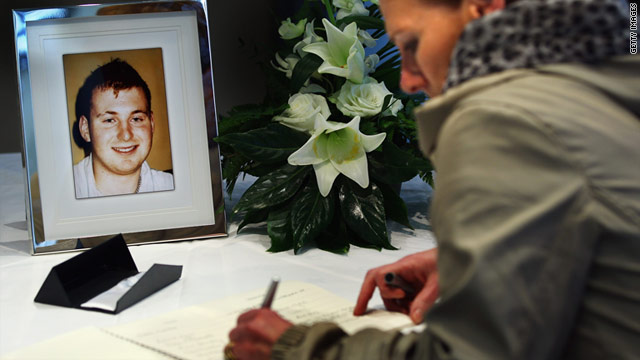 Editor's note: Peter Taggart is a journalist based in Belfast, Northern Ireland. In a 20-year career, he has covered the Northern Ireland conflict and peace process for Irish and international print and broadcast media.

There is still a hardcore of terrorists -- and you'll not hear many calling them freedom fighters in this part of the world these days -- intent on dragging us back to the past.

Tragically, there was a graphic illustration of that on Saturday afternoon as a young police officer was killed when a booby-trap bomb exploded under his car. It happened in the previously bomb-hit town of Omagh, where in August, 1998, 29 people -- including a woman pregnant with twins -- were killed. There's speculation the device contained explosives supplied way back by a certain Moammar Gadhafi.

The Daily Telegraph newspaper in London has reported detectives are trying to establish whether Saturday's car bomb was made using Semtex the IRA sourced from Libya in the 1980s. The newspaper said the potential link prompted urgent questions from members of parliament about the role of Libya's foreign minister, Moussa Koussa, in arming the IRA. Koussa fled to Britain from Libya last week.

The slain police officer was 25-year-old Catholic Ronan Kerr. The fact he was Catholic is significant. Little over a decade ago, the police service in Northern Ireland was 90 percent Protestant. Now it is almost 30 percent Catholic. It's a sign of progress, but the dissidents -- viewed as being from Catholic backgrounds -- don't worry about creed when the colors of the Police Service of Northern Ireland are being worn.

Worryingly, there are unconfirmed reports in Tuesday's Belfast Telegraph that the attack was carried out by a new faction of disgruntled republicans who have recently defected from the mainstream Irish Republican Army (IRA). Victims' representatives will tell you arms and Semtex supplied by Libya are still being used by the "dissident republican" groups -- hardline anti-British paramilitaries opposed to the peace process -- that continue the campaign long since abandoned by the IRA.

Gadhafi wouldn't win any popularity poll among our IRA victims. In the 1970s and 1980s Libya shipped large quantities of weapons and explosives to the IRA, latterly to get back at the British for supporting the U.S. air strikes on Tripoli and Benghazi in 1986, according to numerous media reports.

The Sunday Times in June 2010 reported that Gadhafi was going to pay up to £2 billion ($3.20 billion) to victims of Irish terrorism for his role in supplying shiploads of explosives to the IRA."

Victims' families say they are yet to receive any money. This week, legal representatives for IRA and Lockerbie victims have been holding talks with rebel leaders in Libya, hoping to get information to bolster their case for compensation from Gadhafi.

Meanwhile it's two years since a police officer was killed in Northern Ireland and the slaying of Constable Kerr last weekend has sent shockwaves across the whole island -- north and south.

Monday's editorial in the Belfast-based Irish News newspaper - which reflects the views of nationalists - summed it up: "People everywhere will be disgusted, shocked and depressed by the pointless death of a young man serving the community... For those who believe the bombers are justified, they should look at this family and at the heartache they have caused. They should also think about the sort of people who can plant a bomb in Omagh, of all places. It is unspeakable."

Kerr was a Catholic officer, deliberately targeted by terrorists from Catholic backgrounds. Not that they have the support of many of their coreligionists. Indeed, the killing has united Catholics and Protestants in condemnation and grief.

The dead constable's mother, widow Nuala Kerr -- on UK Mother's Day and just 24 hours after her son's death -- faced cameras Sunday to urge Catholic officers to stick with the Police Service of Northern Ireland. She said: "This is at a time when we are striving for a neutral police force for the good of our country and I urge all Catholic members not to be deterred by this.

"We all need to stand up and be counted and to strive for equality. We don't want to go back into the dark days again of fear and terror. We were so proud of Ronan and all that he stood for. Don't let his death be in vain."

In the wake of the killing there is now a real sense of fear, especially among police officers, who have been advised by their Chief Constable to be on their guard for further attacks. They have been advised to routinely check under their cars, just like the old days.

It's not the first booby-trap car bomb -- a year ago another Catholic officer miraculously survived a similar incident, but lost both legs. Other officers now expect to be attacked. One quoted anonymously in the Belfast Telegraph said: "I live as though it is going to be me next." Another, a female officer, comments: "Worrying every day is no way to live."

A colleague is defiant as he speaks about the Kerr killing: "This tragedy will not put me off." There are no names though and media in Northern Ireland have been asked by the police force not to show the faces of officers, in case they are identified as targets by dissidents.

True, things have improved dramatically here from the dark days of what were euphemistically called "The Troubles" when thousands died.

There is now a relatively stable power-sharing administration. The vast majority of people don't want to go back to the daily despair of the 1970s and 1980s, but for the extremists the fight is not finished and won't finish while Northern Ireland is part of the United Kingdom.

There is a problem and it needs to be addressed. Some call for a massive security crackdown, others don't want a return to the days of constant checkpoints and troops on the streets. Restricting movement and freedom would be giving in to the dissidents, they say.

A few more incidents and the picture could change again. No one expects a deterioration to the widespread violence of the past, but how bad it gets in the future remains to be seen. We are clearly not out of the woods of history just yet.

On the plus side, the Provisional IRA no longer poses a threat. Far from it. A former IRA commander, Martin McGuinness, is the deputy first minister of the power-sharing government.

The British army is off the streets and so-called loyalist paramilitaries, while still around, are much more likely to be dealing drugs than killing Catholics.

But it is an imperfect peace. Terrorism has been the elephant in the room. Law-makers in Northern Ireland, keen to stress the success of the political process, especially ahead of forthcoming elections, are accused by some of playing down the threat.

Now it can't be ignored. Constable Kerr is the first PSNI officer to be killed by terrorists in two years, but it's not for want of trying.

The union for the police force, the Police Federation, says there were 175 gun and bomb attacks directed at police officers on and off duty in 2010.

The trend has continued this year and it's clear the dissidents do not intend to go away.

They are thousands of miles apart, but there's a parallel between the plight of Gadhafi and the Irish dissidents he has helped to arm. Despite wholesale opposition, both are still hanging on, still making a noise and still capable of instilling fear in their enemies.