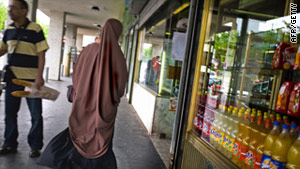 There were demonstrations Sunday in Paris against the burka and niqab ban due to start on Monday in France. File photo.
STORY HIGHLIGHTS
RELATED TOPICS

Paris (CNN) -- Police in Paris arrested dozens of people for trying to hold an unauthorized demonstration to protest a ban on the wearing of Islamic veils such as burqas, they said Sunday.

France's controversial ban on the burqa and niqab takes effect on Monday.

A total of 59 people showed up at the scene of the planned march, which did not have police approval, authorities said. All were detained for refusing to leave the scene on Saturday.

Five were detained overnight because they did not have proper identification, and two of them are still in custody, police said Sunday afternoon.

Two other people, including the Britain-based radical Muslim Anjem Choudhury, were arrested while traveling to the planned demonstration Saturday, police said Sunday.

The organizers were denied permission to march because they are known Islamic extremists who could have promoted racial hatred, because they have been arrested in the past, and because of the likelihood that the protest would provoke a counter-demonstration that could lead to violence, police said.

A silent protest march against the burqa ban is planned for Monday morning in Paris. That demonstration, which was organized independently of the unauthorized Saturday protest, has been approved.

"The French Republic lives in a bare-headed fashion," he said in an official government newspaper explaining the law.

The law was passed in October but included a six-month period to inform people of the penalty before it went into effect.

"Given the damage it produces on those rules which allow the life in community, ensure the dignity of the person and equality between sexes, this practice, even if it is voluntary, cannot be tolerated in any public place," the French government said when it sent the measure to parliament in May of last year.

"The ban does not target the wearing of a headscarf, head-gear, scarf or glasses, as long as the accessories do not prevent the person from being identified," the Interior Ministry said in a statement