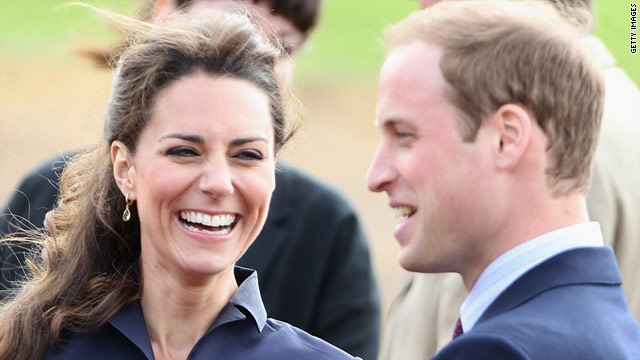 The royal couple want a family but 310-year-old rules dictate boys take priority over girls when it comes to the throne.
STORY HIGHLIGHTS

London, England (CNN) -- The British government has accepted that laws surrounding succession to the throne could be "discriminatory" and that "discussions have started" to change them, CNN has learned.

Current rules state older daughters are overlooked in favor of the first-born son, and non-Protestants are banned from assuming the throne.

The development comes as Britain gears up for the royal wedding of Kate Middleton and Prince William -- second-in-line to the throne as the eldest son of the heir to the throne, Prince Charles.

As the wedding preparations gather speed it was almost inevitable the couple would be asked about their hopes for children.

Prince William told ITN: "I think we'll take it one step at a time. We'll sort of get over the marriage first and then maybe look at the kids. But obviously we want a family so we'll have to start thinking about that."

What Harry's wearing to the wedding!

It's the most simple of wishes for any engaged couple but, if you're second in line to become king, and head of state for the Commonwealth countries as well, the first born could spark a constitutional crisis.

If Kate and William were to have a daughter followed by a son, then the son would currently be next in line for the throne after William.

In the 21st century that will likely be more unpalatable than it was in the 18th century when the 1701 Act of Settlement laid down the succession laws.

The British government confirmed to CNN that it has been working on this matter behind closed doors.

The Cabinet Office said: "The Government accepts there are provisions which could be discriminatory.

"Discussions have started with those Commonwealth countries who would be directly affected by any change in the rules, and are continuing, but it would not be appropriate to release details at this stage."

If William was Catholic, he could not succeed to the throne. He also could not become king if Kate had been Catholic.

The anti-Catholic clause is a throwback to the 1600s when the Catholic King James II was perceived as favoring Catholics and appointing them to positions of power.

While the Act of Settlement says only Protestants are eligible to succeed, it also specifically bans Catholics.

Professor Rebecca Probert, a family law expert at Warwick University in central England, explained the shortcomings of the anti-Catholic clause.

"The reason that's bizarre is because you don't forfeit the right to the throne if you marry someone who subsequently becomes a Catholic so the act doesn't even achieve what it sets out to achieve.

"He could marry any other religion. He could marry a Satanist, a Scientologist, a Muslim, a Methodist and that would have no impact whatsoever in his right to succeed to the throne."

Keith Vaz, a British member of parliament, said: "I think they are all sitting down praying that Prince William and Kate Middleton have a son first, because if they do there is no need to consider this for some time to come."

Vaz added that the current boys' first rule was "offensive" and he wants to see the 310-year-old law updated.

He has proposed a bill to outlaw the discriminatory parts of the succession rules, which says: In determining the line of succession to the Crown and to all the rights, privileges and dignities belonging thereto, no account shall be taken of gender.

But he doesn't just need to get it through the UK parliament. He also needs the support of every parliament in all 15 realms or countries where the queen is monarch. So far he has the support of just one, St Lucia.

A Buckingham Palace spokesperson said the laws for succession and the possibility of changing them was a matter for government.