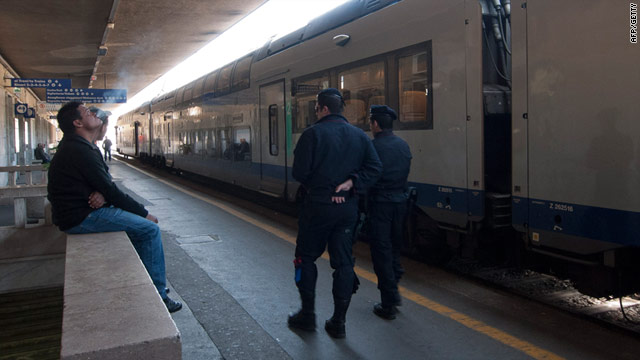 Tunisian migrants at Vintimiglia on Monday waiting to cross the border into France. Trains from Italy were blocked Sunday.
STORY HIGHLIGHTS

(CNN) -- The Italian and French governments were both trying to defuse an escalating diplomatic row Monday after France refused entry to a train carrying North African migrants from Italy.

Italy complained to France on Sunday after authorities blocked a train with Tunisian migrants from the border city of Ventimiglia entering Menton on the Cote d'Azur. The Tunisians had been issued resident permits by Italy, allowing them to travel freely in many European countries.

French Interior Minister Claude Gueant said Monday in Bucharest that France did not want any continuing tensions with Rome regarding the train incident.

Gueant said Rome's decision to give temporary resident permits to more than 25,000 Tunisian migrants arriving in Italy since January had been "heavily contested by many countries in the European Union."

Some 300 French and Italian protestors from a group named "Train for dignity," were also aboard the train in a show of support for the 60 Tunisians who were hoping to enter France.

Gueant said that although France accepted this decision, there were conditions - namely that the migrants had to prove they could support themselves financially.

Since the mass political unrest started in North Africa and other Arab states in January, a large number people have fled Tunisia and Libya to Europe, where governments have been trying to prevent a refugee crisis.

Italy's coast guard said at least 1,623 migrants landed on the island of Lampedusa over a 24-hour period in mid-March alone.

Italy's foreign minister has estimated that as many as 300,000 Libyans could try to leave and could potentially end up in his country.

Medecins Sans Frontieres said Saturday that it had evacuated nearly 100 people by boat from Misrata in Libya and on Monday the UK Department for International Development (DFID) said that it would help 5,000 migrants trapped by fighting in western Libya.

The DFID said £1.5 million ($2.43 million) would be made available to charter ships to get people out of the rebel-held town of Misrata and transfer them to Benghazi.

Andrew Mitchell, the UK International Development Secretary, said his department would help fund their evacuation in ships chartered by the International Organization for Migration, which says the majority of unauthorized immigrants arriving in Lampedusa are Tunisian.

Italy for its part has issued temporary resident permits to thousands of Tunisian migrants and the country on Sunday said it was angered after trains were stopped at the border for around six hours until traffic resumed later that evening.

However, at a briefing with journalists Monday, a spokesman for the Italian Foreign Minister Maurizio Massari, tried to play down the issue: "The situation was clarified and the incident resolved yesterday (Sunday). On the immigration issue, there is a continuous dialogue taking place between the Interior Ministers of the two countries to deal with the problem. We are working together. There is no tension. We are working together to find steps to take to solve the immigration problem.'

According to a spokesman for the French Interior Ministry the border was never closed but circulation was "temporarily halted in order to avoid any risk of an accident," because of an unauthorized protest in support of the Tunisian migrants.

Claude Gueant insisted that France had respected the Schengen agreements to the letter and a first analysis by the European commission on Monday showed that France's decision to stop the trains was in line with the Schengen rules.

The Schengen agreement allows people to travel between 25 European countries without the need of a passport.