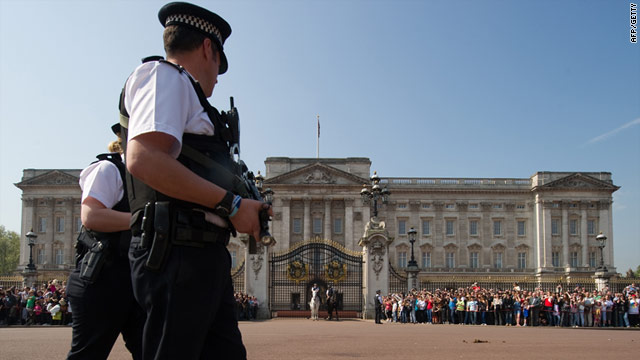 London (CNN) -- Terrorist groups, anarchists and other political extremists are the most obvious potential security threats to the royal wedding on Friday, but the most potent danger comes from obsessive lone operators, say experts.

These 'fixated' individuals are such a threat that in a small office not far from Buckingham Palace in central London a team of psychiatrists, psychologists and police officers are busy trying to counter that threat.

The team is part of the Fixated Threat Assessment Center (FTAC), a unit established in 2006 with the responsibility of identifying and the power to indefinitely detain individuals who harass, stalk or threaten the Royal family and others in public life.

A forensic psychiatrist, Dr. David James, is the clinical director of FTAC and has conducted research into attacks on the Royal household.

"The royal wedding has become the focus of attention for various fixated individuals who have responded by making threats to disrupt events -- some for deluded paranoid reasons and others because they believe themselves already to be married to Prince William. Such individuals generally meet the criteria for compulsory care under the Mental Health Act," says James.

The Metropolitan Police said it does not comment on security matters relating to the royals, but it has been reported that police are monitoring and have spoken to a number of people they suspect to be "fixated" regarding the royal wedding.

A number of the individuals live abroad and it's reported some have been denied access to the UK.

Sources at FTAC told CNN that such police procedures would not be surprising.

Fixated individuals, according to FTAC, have an obsessive preoccupation with a person that they pursue to an irrational degree, spending much of their waking lives thinking about that person.

James says the main risks to royals and elected politicians in Western countries come not from terrorists or criminal groups, but from fixated loners, the majority of whom are mentally ill.

"There appear to be many hundreds of people at any one time who are fixated on the royal family," says James.

There have been a number of royal security breaches over the years, including a 1989 incident in which a mentally-ill man walked past two armed guards at Buckingham Palace and tried to talk to Queen Elizabeth.

Perhaps the most famous breach of royal security came in 1982 when Michael Fagan scaled the fence at Buckingham Palace, ran across the lawn and climbed into the queen's bedroom while she slept.

FTAC research found that in one year royal households received approximately 10,000 letters that were "bizarre or inappropriate" in their content, with many of the writers "appearing to be obviously mentally ill."

The agency, run jointly by the Metropolitan Police and National Health Service, gets about 1,000 referrals a year from ministries, parliament and the royal households.

Of these, around half are of low concern while the others are investigated. These can be anywhere in the United Kingdom or abroad.

"A number of such individuals from other countries who are flagged up by FTAC to the UK Border Agency, which may then chose to deny them entry - and not infrequently does," says James.

Apart from targeting lone individuals thought to be a threat, the police also are mounting a wider security operation aimed at protecting wedding guests and the tens of thousands of people expected to visit London on the big day.

Hundreds of officers have been conducting a "search and sweep" operation along the wedding route, checking drains, traffic lights, dustbins and any other street furniture that could be used to hide a bomb or weapons.

Lynne Owens of the Metropolitan Police said: "There is no specific intelligence in relation to this event but we would be really naive to ignore (anti-royal) comments on social media.

"If you are thinking of entering the crowds as a shield just don't do it. My officers will spot you in the crowd and they will take quick and decisive action to remove you. We won't let anybody disrupt this very exciting day for the royal family and the country.