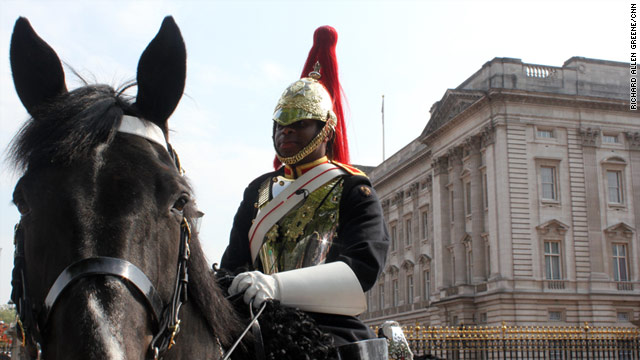 Trooper Denton John, the only American in the Household Cavalry, will be among the soldiers escorting Queen Elizabeth II.
STORY HIGHLIGHTS

London (CNN) -- Growing up on the streets of Manhattan, riding skateboards and listening to punk rock, Denton John never expected to find himself where he'll be on Friday -- on horseback, boots gleaming, as the only American in the royal wedding of Britain's Prince William and Kate Middleton.

But that is just where he will be, in white gloves and red plume, as a member of the Household Cavalry Mounted Regiment, protecting Queen Elizabeth II as she leaves Westminster Abbey to return to Buckingham Palace.

Smiling as the spring sunshine glints off his breastplate outside the palace, Trooper John, 23, explains that he grew up in New York City, the son of immigrants from the small island nation of Grenada.

"When I was young, it was all about skateboarding, punk rock... I was into everything," he says.

But after graduating from Wadleigh High School in Harlem, he decided to take a year off rather than go directly to college.

He spent it in Grenada with his parents, and that's where he decided to enter the selection process for the British Army.

John was eligible to serve because he holds Grenadian citizenship, as well as American. The Caribbean nation is a member of the Commonwealth, the association of countries that used to be part of the British empire.

He hadn't considered a military career when he was a kid, but by the time he was 20, it appealed, he says.

He liked the idea of being part of something larger than himself and seeing the world -- and as a soldier, he says, you "mature faster as a person."

He passed a pre-selection process in Grenada and further selection in England, then passed basic military training and headed for the Household Cavalry.

That's the same unit both Prince William and Prince Harry, the second and third in line to the British throne, served in after they graduated from Sandhurst, the British military academy.

Unlike the royals, though, John had never been on a horse before joining the army.

That's actually not unusual in the storied unit, he says: "About 90% of Household Cavalry troops never sat on a horse" before entering the Army.

But with two years of training now under his belt, John will spend all day Friday on one, culminating when his squadron, the Blues & Royals, escorts the queen's carriage home after her grandson's wedding.

And although tourists rightly see the Household Cavalry as a showpiece of the British monarchy, John is quick to point out that they are soldiers first and foremost.

"We are the Queen's Life Guard," he says. "We are the first line of defense if anything should happen to that carriage. We are very vigilant as soldiers."

"I'll be taking in the sights and sounds, but I'll be very focused on my job," he says.

John will be in a unique position Friday, says Captain James Hulme of the Household Cavalry.

It's John's parents' dream, too, he says. They knew he was in the Army, but didn't know exactly what his role was until recently.

"My mom's very proud," he says. "She's telling everyone about this."