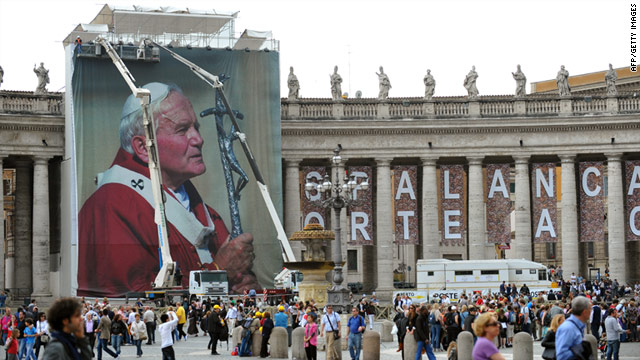 (CNN) -- More than one million people are expected in Rome this weekend for the beatification of Pope John Paul II, the biggest event in Vatican City since his death six years ago.

Hundreds of thousands of Catholic faithful will gather in St. Peter's Square to witness the ceremony, the penultimate step towards John Paul II's sainthood.

Beatification means the candidate can be referred to as "blessed," and that one miracle has been confirmed in his or her name, according to CNN's John L. Allen, Jr. Another miracle is required for canonization, the formal act of declaring someone a saint.

While Rome is used to hosting big crowds, there is something special about this weekend's celebration to commemorate the late pope's road to sainthood, according to the city's mayor.

"Pope Wojtyla was a friend not just of the faithful but of all of Rome," says Mayor Gianni Alemanno, referring to the pope by his birth name. "We remember him in our neighborhoods and our churches, unforgettable memories that we want to celebrate together."

An extra 120 charter planes will bring thousands of faithful from Poland and Spain to Rome for the ceremony.

On top of those extra charter planes, Alitalia and other airlines are laying on 30 more "special flights" to bring pilgrims to Rome. The city's Fiumcino airport has even set up monitors in the departure lounges displaying documentaries of the late pope's life.

While the image of John Paul is ubiquitous throughout Rome on a normal day -- his face finding its way onto rosaries, candles, T-shirts and trinkets -- pictures of the late pope are unavoidable ahead of Sunday's beatification.

Rome's city government has plastered 30,000 posters of John Paul II around the city on everything from coffee shop windows to taxicabs and buses. Streetlamps are draped with banners, and every major Italian newspaper and magazine has issued special editions.

Epoca magazine's retrospective issue even refers to John Paul II as a saint despite the fact he will remain one step away after Sunday.

Documentaries about John Paul II's life have dominated Italian airwaves in recent days, and the beatification will be broadcast in St. Peter's Square and in Italian city squares from Brescia to Bari.

In a rare move, the Vatican and the Italian government are both issuing stamps to commemorate the occasion.

In addition to the transferring of John Paul II's casket before the tomb of St. Peter and Saturday night's vigil at Circus Maximus, the city of Rome has also organized a series of events, including a Monday concert and the unveiling of a bronze statue of John Paul II in mid-May.