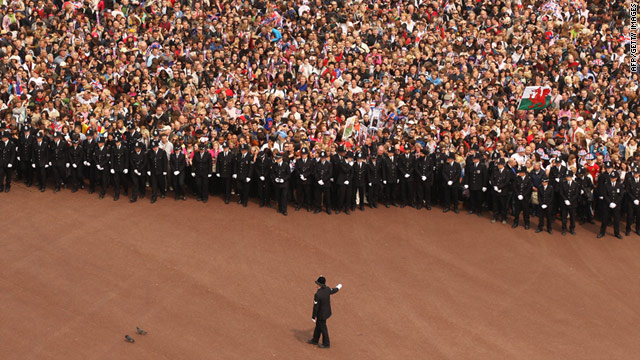 In one of Britain's biggest ever security operations, more than 5,000 police officers were involved in the royal wedding on Friday.
STORY HIGHLIGHTS
RELATED TOPICS

London (CNN) -- London police arrested 55 people from inside and outside the areas cordoned off for the royal wedding, the department said Friday night.

The arrests were for various offenses, including disturbing the peace, assault and possessing an offensive weapon, the Metropolitan Police Service of London said.

Police had warned protesters that they would be dealt with "robustly and decisively" if they disrupt the wedding of Prince William of Wales and Catherine Middleton -- London's biggest royal wedding in three decades.

Authorities had put in place one of the biggest security operations ever held in the United Kingdom: more than 5,000 officers were involved.