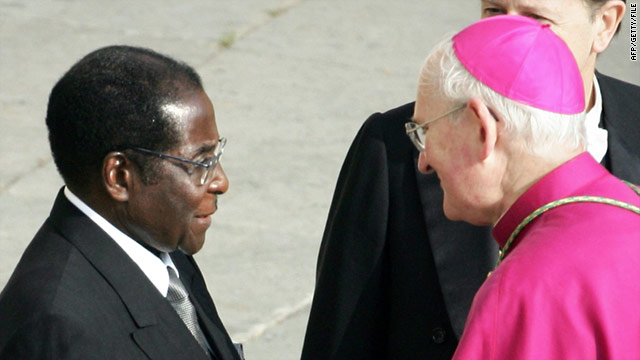 The Vatican did not personally invite Mugabe to the Sunday event, said the Rev. Federico Lombardi of the Holy See Press office.

But a diplomatic relationship exists between Zimbabwe and the Vatican, a sovereign state that is not a member of the European Union.

"It (the Vatican) cannot tell Mugabe not to come if he wants to take part, just like it wouldn't tell no to (U.S. President Barack) Obama or (French President Nicolas) Sarkozy, if they had wanted to come," Lombardi said.

The beatification is the biggest event in Vatican City since Pope John Paul II's death six years ago.

Hundreds of thousands of Catholic faithful will gather in St. Peter's Square to witness the ceremony, the penultimate step toward the pontiff's sainthood.

On Friday, workers exhumed the pope's casket from its tomb in the Vatican Grottoes.

"As can be recalled, the Pope was buried in three coffins," Lombardi said. "The first of wood -- which was displayed during the funeral. The second of lead, which is sealed. And the third -- external one -- which is also made of wood and was the one revealed this morning at the moment of the extraction from the tomb.

"It is in a good state of preservation, even though showing signs of the passage of time."

After the Sunday ceremony, the casket's permanent home is likely to be the basilica's Chapel of St. Sebastian.

Beatification means the candidate can be referred to as "blessed," and that one miracle has been confirmed in his or her name. Another miracle is required for canonization, the formal act of declaring someone a saint.