Poles already think of John Paul II as a saint 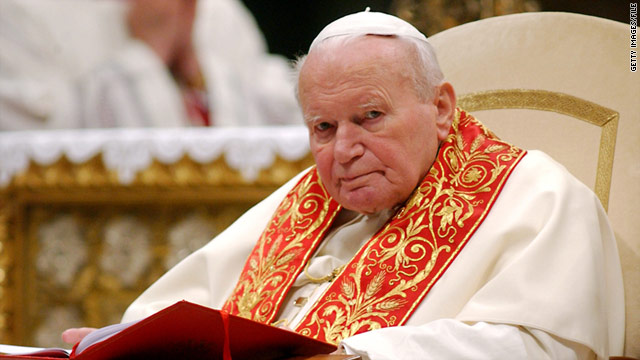 Krakow, Poland (CNN) -- For many Poles, John Paul II's beatification simply confirms what they already knew. They thought him a saint already, the very fact of his papacy a blessing for Poland.

At the Sanctuary for Divine Mercy in Lagiewniki, Krakow, around 50,000 people braved the rain to watch the beatification ceremony live from the Vatican. The organizers had expected higher turnout in Krakow.

It's Karol Wojtyla's role in the fall of communism that is his true miracle for many people in Poland.

"During his first visit in Poland, he said this famous sentence, 'Let the Holy Spirit come and renew this land,' " Renata Kaszuba said. "So he was encouraging the fall of communism, not through blood and war, but through the message that God is the most important one."

There were many here who were too young to remember communism. But they feel their lives were touched, even transformed, by their Polish pope.

One Krakow student said: "It's a great source of pride for us to have another Pole blessed. I didn't have the chance to attend a Mass celebrated by the pope, but I watched his visits on television."

"I don't even know how to describe it," said another. "He's like a second father for me."

Portraits as he overlooks his beloved Tatra Mountains or aerial shots of Mass attended by hundreds of thousands in Krakow's Blonia meadow.

Children pose beside giant photos of a pope they'll never know. But his spirit lives on in the collective memory of the Polish nation.

There are some people who criticize the rush to beatification or who find fault in the policies of John Paul II's papacy, but you won't find them here.