From Fanny Facsar, For CNN 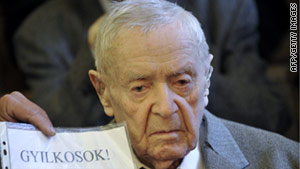 Sandor Kepiro, 97, has denied killing anyone during a raid in Novi Sad, Serbia, in 1942.
STORY HIGHLIGHTS
RELATED TOPICS

Budapest, Hungary (CNN) -- One of the world's most wanted Nazi war suspects, Sandor Kepiro, 97, went on trial Thursday in Hungary charged with the slayings of 36 Jews and Serbs in Novi Sad, Serbia, in 1942.

Kepiro, a former officer in the Hungarian gendarmerie, protested his innocence in the Budapest municipal court saying, "I am not guilty, and I have always lived a decent life."

He denied having killed anyone during a raid on Novi Sad, instead claiming to have saved the lives of five people.

And he said he did not know Jews or Serbs were the targets of the raid, saying that as far as he knew it was against anti-Nazi "partisans."

Hungary sided with the Nazis early in World War II and in January 1942, its troops killed about 3,000 Jews and Serbs in Novi Sad, according to the Holocaust Encyclopedia. Hungary had annexed the territory at the time.

Kepiro said he never participated in or saw any deportation of Jews.

Ten minutes before the trial, he said he did not expect so many people to come, that the charges are lies, and that he is innocent.

When the trial began Kepiro said he could not hear and hardly sees anything, but as proceedings continued he appeared to be able to follow them.

Kepiro's daughter held a sign accusing the court of being "killers" for persecuting an "old man."

"This is a show, Sandor," he shouted at the defendant when Kepiro arrived in court, suggesting that he was acting more frail than he was.

Zuroff, the director of the Simon Wiesenthal Center in Israel, tracked down Kepiro in Budapest in 2006 and he said this could be one of the last Holocaust-era trials.

"Time does not diminish the guilt of the killers and old age should not protect those who committed such heinous crimes," he said.

Kepiro sued Zuroff for libel for calling him a war criminal. A Budapest court acquitted Zuroff this week.

Kepiro's lawyer, Zsolt Zetenyi, said before trial that Jews should look for other ways to find justice.

The court "is clearly not the venue" and Kepiro is innocent, Zetenyi said.

Hungary's pro-Nazi government resisted deporting its own Jews to death camps, according to the Holocaust Encyclopedia. Germany occupied Hungary in 1944.