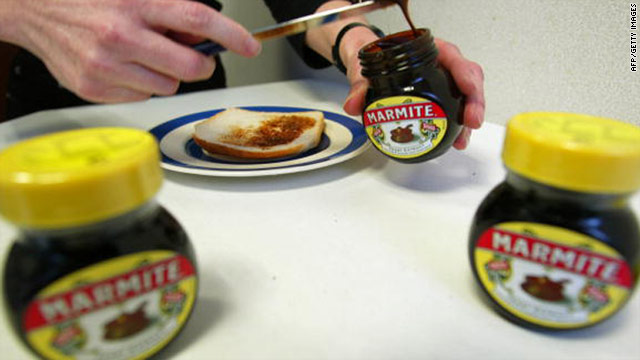 Marmite isn't to everyone's taste but for British expatriates it's a flavor of home.
STORY HIGHLIGHTS
RELATED TOPICS

London (CNN) -- A savory spread popular with British expatriates has found itself at the center of an unsavory furor in Denmark after authorities pulled it from shop shelves.

Sales of Marmite, a dark and sticky substance usually eaten on toast, were halted by the Danish Ministry of Food, Agriculture and Fisheries because it violated regulations over vitamin-fortified produce.

With a distinctive yeasty flavor, Marmite isn't to everyone's taste, but for Brits living abroad the spread is as much a talismanic symbol of their homeland as a snack-time favorite, and its removal had stirred widespread indignation.

"We didn't sell any to Danes, but quite a lot to British customers, and many of them have been asking me why we're not stocking it any more," said Marianne Ørum, who runs a Copenhagen store selling food from the UK and South Africa.

"I have to tell them it's illegal to sell it."

Danish authorities, however, insist they haven't banned Marmite -- or its Australian equivalent Vegemite -- but are merely enforcing a 2004 legislation on the marketing of vitamin-enhanced foodstuffs that has already hit sales of Kellogg's cereals.

"Neither Marmite nor Vegemite and similar products have been banned by the Danish Food and Veterinary Administration," an official statement said.

"However, fortified foods with added vitamins, minerals or other substances can not be marketed in Denmark unless approved by Danish food authorities."

Says Ørum, this is tantamount to a ban.

"You can apply for permission to sell products such as Marmite, but this costs a lot of money and even then the government will probably say no.

"I think that people should be allowed to choose for themselves what they are allowed to eat. It is not a decision for the government."

While yet to become a full-blown diplomatic incident, the Marmite embargo has generated howls of protest among Brits.

"What am I supposed to put on my toast now?" advertising executive Colin Smith, who had lived in Denmark for six years, told the Guardian newspaper.

"I still have a bit left in the cupboard, but it's not going to last long."

Others have taken to Twitter to suggest retaliatory restrictions on Danish exports such as Lego toy bricks, Carlsberg beer or the tales of Hans Christian Andersen.